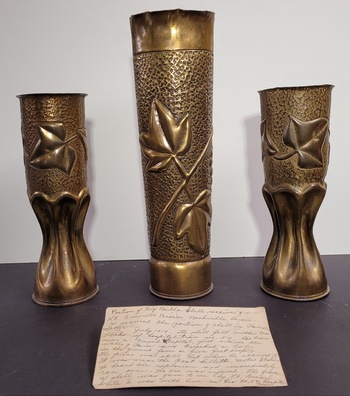 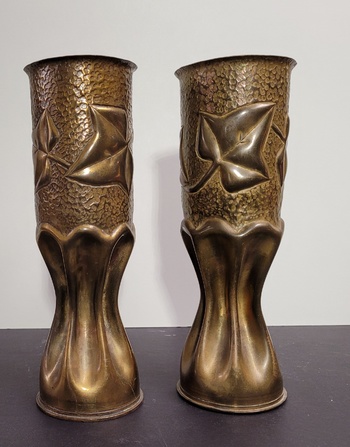 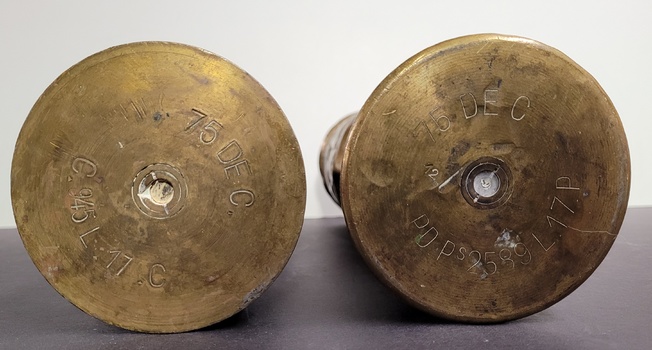 I just picked up these pieces a few days ago. There's a lot to see, so I'm going to break it into 3 parts.

The first picture shows the full group. 3 shells and a note. We will start with the pair of matched shells. These shells are marked 1917 on the bottom in the date code.

These are two 75mm French artillery shells. This is trench art. The owner told me they were made by Americans, but I cannot confirm that. It would make more sense that they were done by French soldiers? ** More research is needed.

**UPDATE**
"As World War I raged in Europe, the US Army found itself in need of a modern artillery piece should America decide to become involved. The French 75mm Modele 1897 was the best candidate and is widely considered by historians to be the first modern cannon.

When America entered the war, the US Army adopted the French design for its field artillery batteries and fielded more than 1900 guns by the war's end. Domestic production began in spring of 1918, but most guns used during the war were French manufactured. "

This group was owned by Dr. John W. Goodsell. This group came from a relative of Goodsell. They are in the process of writing me a letter of provenance for the items.

The letter we will see in part 3 is from 1918 and signed by Goodsell.

Dr. John W. Goodsell was a surgeon with the Peary North Pole expedition in 1909.