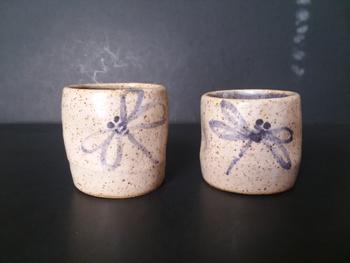 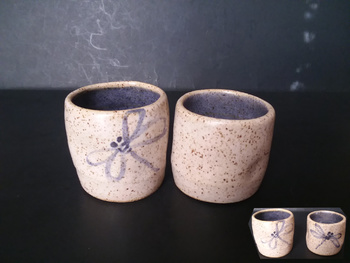 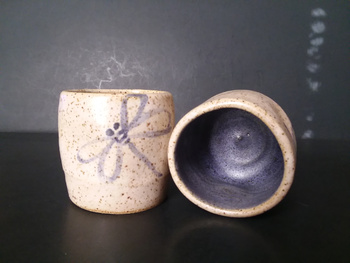 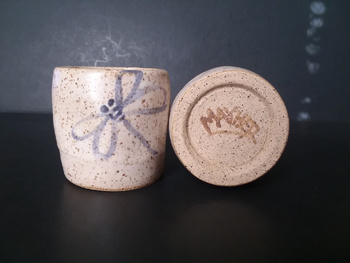 These dragonfly themed yunomi are 2.75" and 2.5" high x 2.5" diameter, signed "MAYHER" on the bottoms. Both have indentations to aid in holding them. When I first saw images of these, I immediately assumed they were Japanese until I saw the image of the bases of the cups. Hmmmm. I fairly quickly identified the potter as Caroline Mayher of Brooklin, ME and also quickly realized why I had been fooled as she was the student to two well known Japanese potters:

"Caroline Mayher began her ceramics career as a student of Japanese potter Henry Okamoto at the Clay Art Center in Port Chester, N.Y. She was also a student of Makoto Yabe. Attracted by the aesthetic of the Japanese tea ceremony, sometimes known as wabi sabi, she developed a style of simple, natural, functional containers, sometimes decorated with leaf or shell prints, often using local clay as a glaze ingredient. While continuing to make her own work, she taught ceramics for 25 years at Hackley School in Tarrytown, N.Y., and then for 4 years at the Noble and Greenough School in Dedham, Mass. She has shown her work at various galleries including the Handworks Gallery in Blue Hill, Maine, and at studio open houses at her own studio in Brooklin, Maine, where she now lives year round."

I am not sure if Mrs. Mayher is still active as the last post to her FB page was in 2015. She was born in 1941. More examples of her work may be seen here:

She often used a speckled glaze which can be seen on these yunomi. Calling these "Japanese Pottery" since her teachers were Japanese potters and she espoused this style, and also "Studio Art Pottery". CW may disagree! I don't feel too bad about being fooled, at first. This is the only meoto yunomi set by Mayher that I could find.