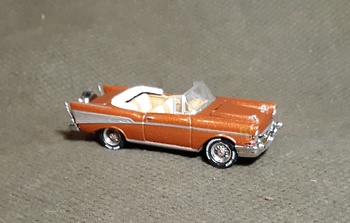 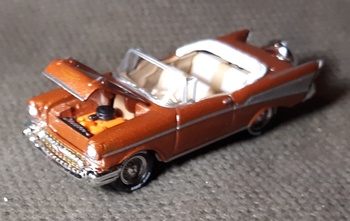 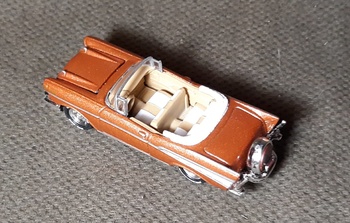 This is quite the stylish model as it has a continental kit. That is the spare tire mounted on the rear fender. Now the 57 Belair had a trunk larger than an apartment in Moscow with plenty of room for a spare tire but it looks cool. This one is done just right. It helps that it is a convertible. Makes a middle class car look like a luxury car. It would be perfect for cruising the Pacific Coast Highway up to Pismo.
This is a reissue of the year 2000 version of this model. It is a 50th anniversary edition to celebrate 50 years of Johnny Lightning. The original Johnny Lightning made by Topper did not last long. Next was the Playing Mantis revival in the late 1990s. I believe Round Two and or AutoWorld is now making these. This is a model currently in production.
Left out the opening hood with engine compartment. It even has a radiator. Also note the two tone interior and large chrome rear panels. The 55 and 56 had a two tone body but this was dropped for the 57. The 57 also had the most ornate grill of the tri-5s.
I still have an Airstream to post. Not sure what I will post next.