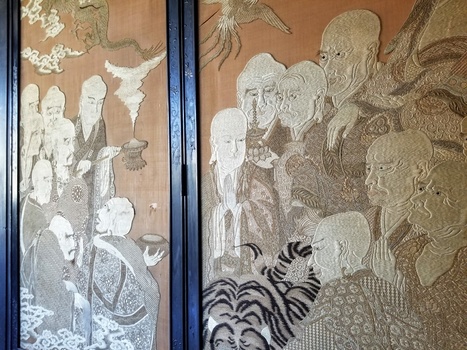 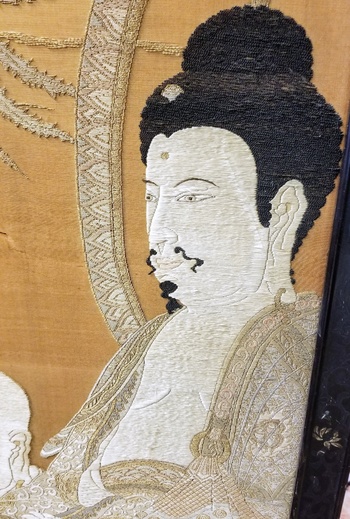 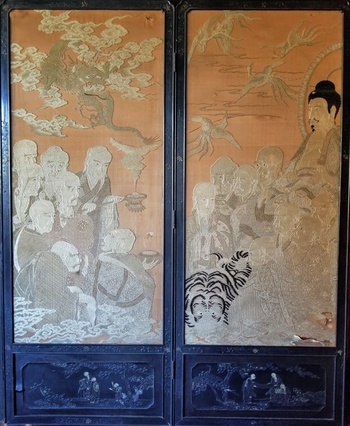 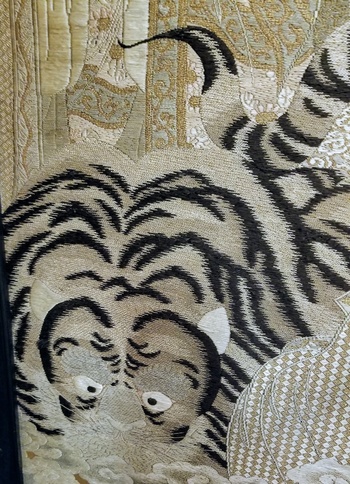 This impressive two-fold Japanese wooden screen (57 x 70 inches) with silk floss embroidered panels likely dates to the latter half of 1890s. It features Amitabha (the celestial Buddha of Infinite Light) and his entourage of sixteen Arhats (enlightened followers), an Asian dragon protector, phoenixes, and a faithful tiger set amidst clouds. The silk embroidery (predominantly white; gold metallic, with a range of subtle hues; and black; hand stitched on a gauze salmon-colored metallic background) is fine and varied. We find the unique expressions, clothing, and items of the Arhats particularly captivating.

This piece was likely created in one of the many studios located in Kyoto during the Meiji era. Buddhist-themed embroideries were popular at the time, and a somewhat similar embroidery panel featuring an Arhat is included in Vollmer's edited work, Re-envisioning Japan: Meiji Fine Art Textiles, p 88. The Ashmolean's exhibit, Threads of Silk and Gold: Ornamental Textiles for Meiji Japan, also notes the importance of religious themes in Japanese export textiles. The bottom of the black lacquered wooden screen includes additional scenes of Buddhist monks (releasing a bird and folding a scroll), executed with inlaid mother-of-pearl. One can only imagine the skill and effort it took to produce a piece of this scale and intricacy.