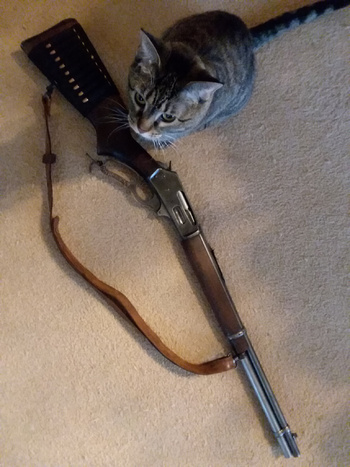 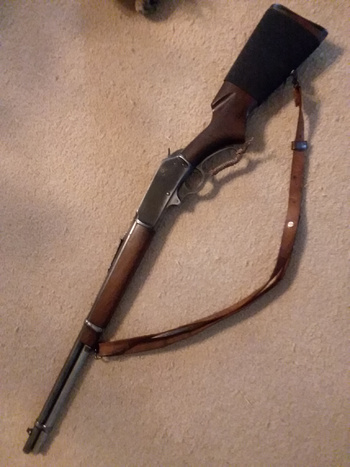 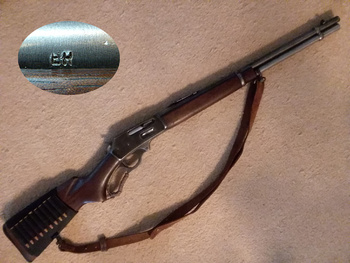 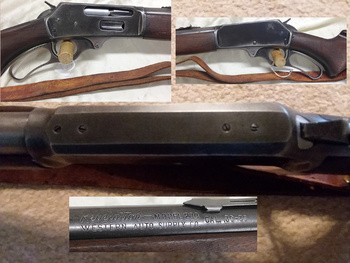 Paving the way for dav2no1's Waffle Top Marlin 336 collection, here is a later version of those rifles. It was made by Marlin for Western Auto, once a ubiquitous auto part/supply chain. Not sure if they still exist. Marlin made rifles for several store chains including Sears & Roebuck which they sold as the Glenfield model which other retailers could then sell under their own brand. The Glenfield was identical mechanically and in quality to the Model 336 but used lower grade hardwood stocks and less refined bluing.

This rifle is chambered in .30-30, a rimmed cartridge popular with American hunters. It is roughly equivalent to the Russian military cartridge used in the SKS and AK 47, the 7.62x39 mm. This rifle has a "Z" prefix serial number which dates it to 1964. It is unusual in that the barrel has an "EM" stamp, which if I ever discovered what that stood for, I have forgotten. The most desirable Marlin 336 rifles have a "JM" stamp, for "John Marlin". I will leave expounding on the virtues and history of the Marlin to dav2no1 in his post but will include the Wikipedia link for these rifles.

My rifle is set up for action shooting with a paracord wrapped lever and an ammunition belt on the stock. The lever has sharp edges which can cause damage to one's hand when rapidly shooting very many rounds. These wraps can attract and retain moisture so must be removed, periodically, to examine and oil the lever. The ammunition belts can also trap dirt and grit which can scratch the stock finish, so should also occasionally be removed for cleaning. Lever action rifles were originally developed for military use in the mid 19th century. The model who assisted in my photo session is Amanda.