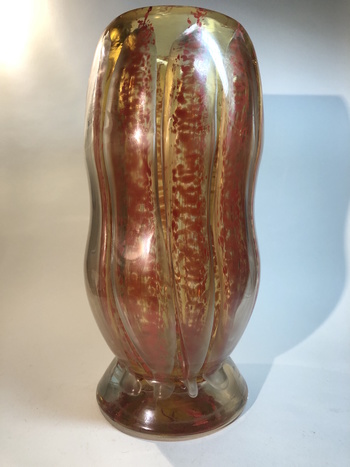 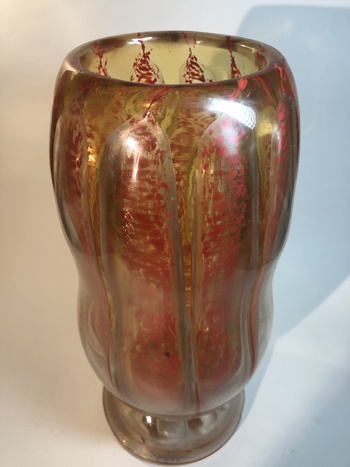 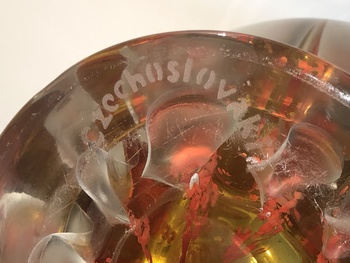 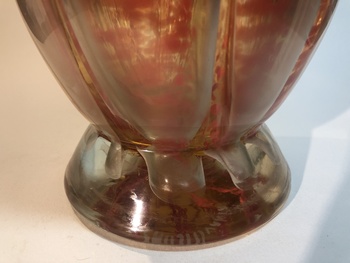 OK - the title is stolen directly from Warren's original listing of this most amazing piece, with an added nod to Steinwald.

Marked with the classic CZECHOSLOVAKIA mark we have come to recognize as Kralik - but more recently are moved to consider as actually a mark of Steinwald. Either way, this piece is extraordinary. It's like nothing ever seen with the mark. Weighing in at 3.4kg (7.8lb) and standing 12" tall, it is something of an enigma. If we consider, for a moment, that for the most part, either Kralik or Steinwald marked their pieces, as we assume, at the factory prior to export, then we could assume that this piece was exported from either manufacturer maybe as late as the end of the 1930s. There's no reason to think it was produced any later, for obvious historical reasons, I couldn't exclude another manufacturer either, but the mark is kind of ubiquitous.

It is difficult for me to describe the process of production on this piece as Warren did such a good job on his original listing - so I'm not going to attempt it here - enough to say, it has more in common with French style glass of this period than it does of Czech. It is heavy as described above and the glass is almost half inch thick ( at it's thinest ). Has 10 vertical elongated channels of trapped air interspersed with melted orange/red frit/powder. I say powder because it certainly does not look like glass spatter - it is semi transluscent. It is possibly a late experimental piece.

Warren was kind enough to sell this to me a couple of years back - with an interesting back story. I think it is a significant historical piece and should be out there for all to see - maybe we'll find another someday??