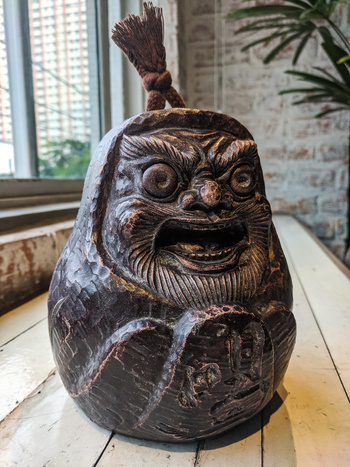 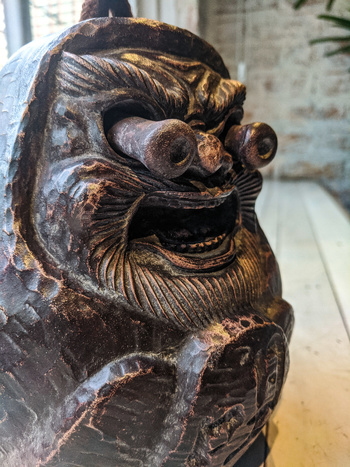 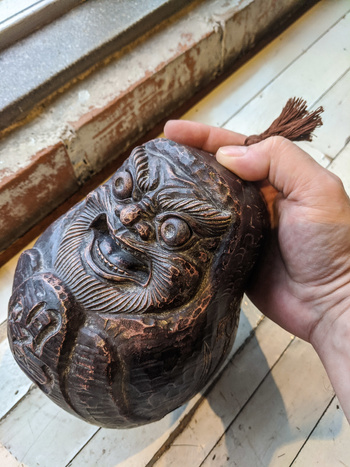 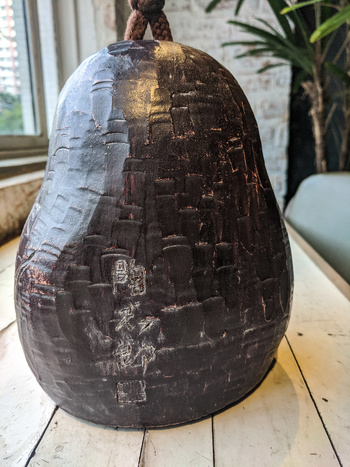 Yes, he is frightening and wonderful at the same time. Even more when his eyes pop out of their orbits.

I could not resist to give my wooden Daruma a companion so I found this impressive clay bell on eBay, offered by a Japanese seller. It is a Dorei bell and it is supposed to bring good luck and scare evil spirits with its sound.

Daruma is the Japanese name of Bodhidharma, an Indian or Persian Budhist monk, responsible for transmitting the Zen Budhism to China. According to the legend, Bodhidharma stood still, seated and facing a wall, for nine years. His arms and legs fell off from atrophy. He fell asleep once during these nine years and to avoid it to happen again, he cut off his eyelids. Wow.

He is a symbol of perseverance, self-control and good luck. This particular Daruma bares the word "Katsu!" in his belly, meaning "Keep it up!" or "Overcome!" and I think he is the perfect role model for us all during these crazy times we are living. He will help me to overcome the isolation and wait patiently for the vaccine.

The last picture shows the signature on his back and a little stamp. The name reads "Kyotaro", according to the seller. It measures 17cm in height and approximately 10 cm in diameter.

Thanks for the visit and KEEP IT UP!