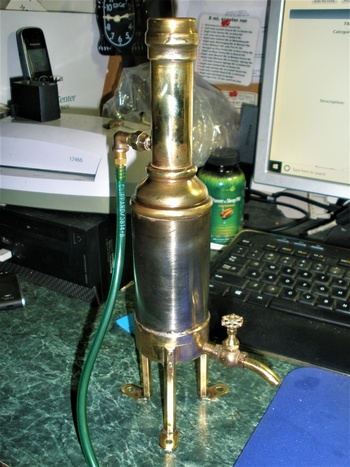 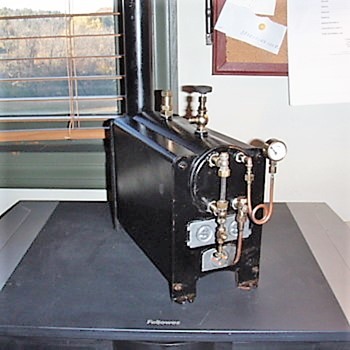 I built this steam engine exhaust condenser to capture the exhaust that comes from the steam engine after it leaves the engine.
By having a condenser after the engine exhaust, you have less oil and water condensate around the engine and table that you display on.
The exhaust enters the condenser where I have a piece of green tubing entering the base of the chimney. The condensate drops to the can at the bottom and clean exhaust exits from the chimney. As the can fills up, you can open the little gate valve (at the bottom of the can), to let the condensate water and oil residue out.
I eventually want to turn the condenser into a "Chuff Pot".
A what!! you say, ..... yes it is called a chuff pot. It gets it's name for the sound that it makes when running the steam engine. it sort of resembles the sound of a steam locomotive. You know "Chuff - Chuff - Chuff.
My new friends at "The Office Of Steam Forum" instructed me as to how to accomplish this. It requires a fairly long piece in the chimney to make the chuffing sound, so a new longer chimney will have to be made to accommodate the insert.
Boy! the toys that we play with !!!
The Stewart boiler shown in the second photo, is the boiler that I am using for this project.
I had to remove the old asbestos heat shields and replace with a modern aerospace material.