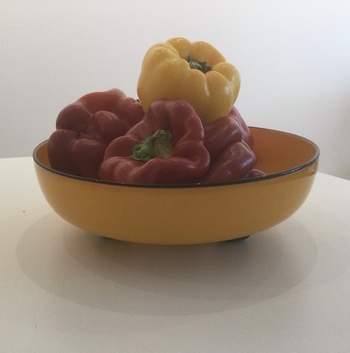 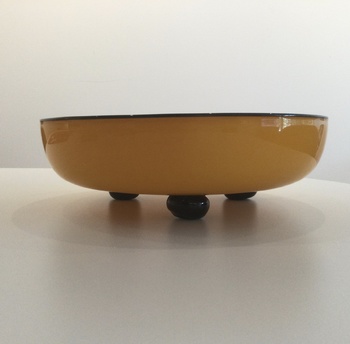 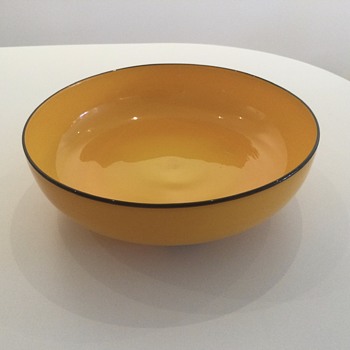 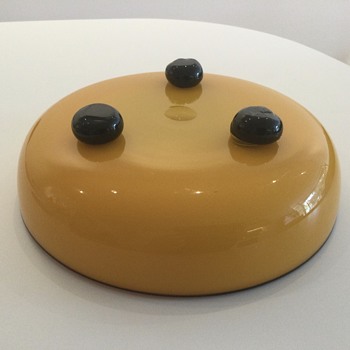 Rückl Tango has always been a favourite of mine. The cadmium colors just pop. A week ago I came across this rather large bowl in a Vinnies and I could not leave it there. The mandarin orange is spectacular and contrasts with the black of the feet and the rim.

A Wikipedia note on the glassworks has this on the firm:
“The Rückl family came from the Swiss canton of St. Gallen and glassmaking has been associated with them for several centuries. The glassmaker Hans Rückl founded a glass company in 1846, first in Cyranov Ostrov. His son Anton (in Czech Antonín) Rückl built a glassworks in 1840 in Vcelnicka near Kamenice nad Lipou (to which he added a grinding mill), in 1893 in Skalice (registered in 1895, no. 416) and in 1903 in Nová Hut (Nižbor). In 1904 his sons Franz and Anton became partners and they renamed the company "Anton Rückl & Söhne" (Antonín Rückl a synové, AS. In the 1930s he opened a branch in Prague (Prague XV.) and Jan Rückl and Hynek Rückl were admitted to the Board of Directors. Due to the crisis in the glass industry and the lack of orders, one furnace had to be shut down. Their smelters produced hollow glass of all kinds, Czech crystal, lead crystal, engraved and cut glass, colored and luxury glass. In 1946, the glassworks was nationalized and since 1992 ownership has been passed back the original owners.”