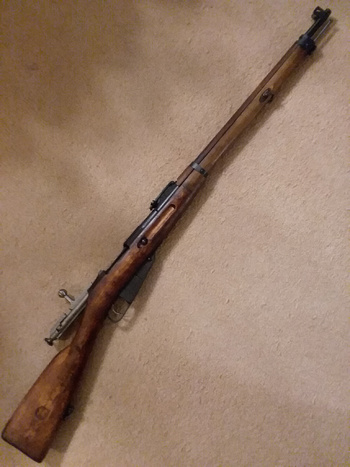 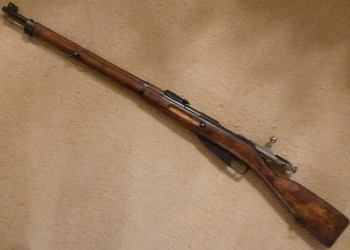 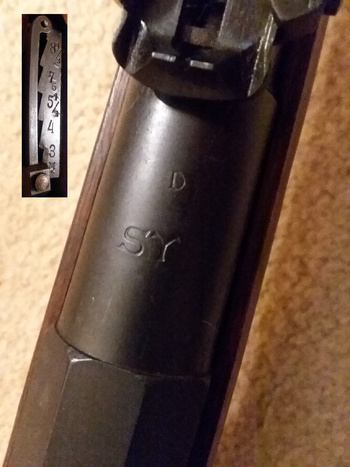 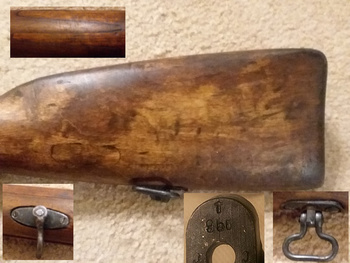 This is a Finnish M28 Civil Guard rifle made in 1927 using a Mosin M1891 receiver. It is 46.5" long, a bolt action rifle, with a Swiss SIG (Schweiz-Industrie Gesellshaft) made barrel chambered in the 7.62x54R (rimmed) cartridge. The M28s were an upgrade to the Finnish M27, made from 1927 to 1929. The barrel shank is marked "SY" for Suojeluskuntain Yliesikunta (Civil Guard).

The manufacturing code on the barrel is "27" in a square showing that this rifle was made in 1927 and is an early production rifle. The barrel shank is "D" stamped to show it could accommodate the Finnish D166 round which was introduced in 1936. It is missing an SA stamp which would show that it was released to the Finnish army as most M27-M28/30 rifles were. There is no bluing or stock wear and it appears that it was never issued. It is also possible that it was re-arsenaled at some point in its life.

These rifles were based on Russian M1891 Mosin receivers from rifles which were captured by the Finns or purchased by them from other countries, besides Russia. There is a stamp on the receiver tang which shows when the receiver was made and by which Russian armory. This one was made by the Tula armory in 1895 so is classified as an antique, which means that it is not subject to US Federal BATF jurisdiction, which makes it more desirable by collectors.

This is a rare variant of a rare rifle. The original contract was for 11,000 rifles, but the contract was not completed and an unknown number of rifles were actually made. The production run of the M28 was interrupted by another upgrade, the M28/30 starting in 1930. There was some politics associated with production of Finnish Mosins. Of the M28 rifles that were completed, most were either reworked into the Finnish M28/30 or M39 rifles or both. Many of the ones not converted were probably lost in action or just wore out and were decommissioned.

I have three M28s, two in the normal stock configuration with the expected amount of wear due to age and use and expected stamps and this one. This one was apparently never issued and never released to the army. The stock is a blend of the M27 and M28 stocks. It apparently had a stock disk at one time, which was common on M27 rifles and suggests the stock is original to this rifle, as there was a general order to remove all stock disks during the Winter and Continuation Wars. That it is a pre-WWII stock is proved by the fact that the splices which join the two parts of the stock together are pointed at the ends, not squared, as shown at the top of image #4. I have several M27 and M28/30 rifles for comparison and their stock configuration agrees with various sources about what they should look like, with minor variations.

The "D" stamp shows that the chamber was reworked after 1936. I have no idea how it survived in its current condition. I suspect it is a very early 1927 rifle, but there is not sufficient information surviving about the production of the M28 to be certain. It may have been in possession of one of the few armed branches of the Finnish military which did not become subordinate to the Finnish Army but that is just speculation on my part.

It took me awhile to remember exactly what this was as there are many variants of the major versions of the Finnish Mosin. I will post examples of the major revisions that have not already been posted as I come across them in my collection. The M1891, M24 and M28 have been posted which leaves the M27, M28-30 and M39. The M39 is considered by many to be the most sophisticated rendering of the Mosin receiver. It IS pretty spiffy. All versions were based on the Russian Mosin M1891 or Mosin Nagant receiver. I stopped collecting them before getting too deeply into the different sub-versions of each major version as I lost interest and moved on to something else. It requires a lot of effort to learn about and track down every version, if that is even possible.

At the time I was collecting them there was no single major reference source which could be consulted about the details and revisions of these rifles. There are some collectors who are, or were before the supply of these dried up, avid collectors who immersed themselves in collecting them and could be consulted by posting to the various on line collector forums that existed. The link above is to one of the best online reference sources for the Finnish Mosin and Mosins, in general. They are interesting firearms and I am not aware of any other nation that followed the approach of basing their main battle rifles on the receivers of captured enemy rifles.