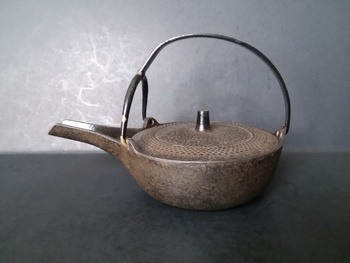 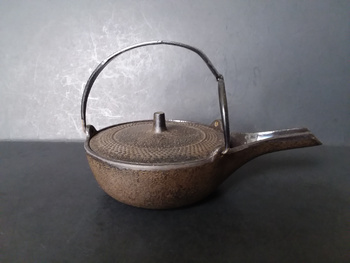 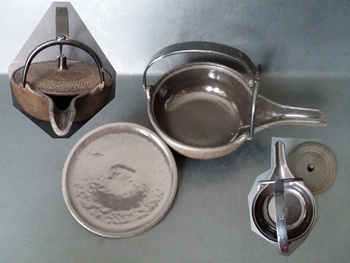 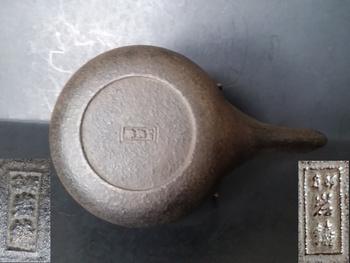 This Japanese choshi (sake warmer) is an enamel lined cast iron kettle for warming sake. It is about 8" long x 5.5" high, including the spout and handle, with a maker's mark on the bottom. The body of the choshi is 5" in diameter x 1.75" high. It weighs 2 lbs and 2 ounces. The maker's mark is not well defined but I was pretty sure that it is the Iwachu mark. I recently found another one of these by the same maker with a much clearer mark and am now certain that the maker is Iwachu. This style of choshi is a modern take on a traditional shape, though the cast iron choshi seems to have fallen out of favor among sake drinkers. This mark dates manufacture to after 1989.

It was pretty inexpensive ($34.91 including tax and shipping!), so I thought it would be a good research opportunity since I had no idea what it was. The person I bought it from said it was a teapot but I was skeptical as it would obviously be very awkward to use for this purpose. I looked a bit at images on line to see if I could find something similar and finally realized that it is a modern version of a Japanese choshi. The three point connection of the handle was my first clue. This choshi was mass produced using the green sand casting process which was developed in the late 1950s and later adopted around the world, including in Japan. This process greatly reduced the cost of Japanese cast iron and made mass production possible. Before that, laborious manufacturing processes made owning a piece of Japanese cast iron very expensive. The simple shape of this version lends itself easily to mass production. The rough texture of the exterior and urushi lining prove that this choshi was produced in the latter part of the 20th century, or later.

The handle configuration, which connects to the kettle at three points, is identical to what I have found on several antique Japanese sake warming kettles, as is the open topped spout. It is heated up with hot water before sake is added to the kettle to warm the sake. I don't think a choshi would be heated directly over a flame as sake is not served very hot and it would be easier to control the temperature by adding water of a certain temperature to the choshi to heat it correctly. It may have been used with candle warmer to maintain the heat. This is the one of the few urushi (lacquer) lined choshi that I have seen, another indication that this kettle is not meant to be used over an open flame. Choshi are typically called "kettles" but I think pot or warmer would be more accurate. The manufacturing method dates this kettle to post 1960, probably the 1980s or 1990s.

I was able to find very little information about the history and use of the choshi in Japan. If anyone has a source for more information please let me know!

Here is some information about green sand casting:

The link above is appropriate as China is cheaply making large quantities of cast iron tea ware and other products, also using green sand casting, which have had a large impact on the viability of Japanese cast iron foundries.