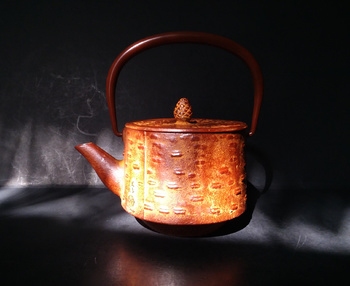 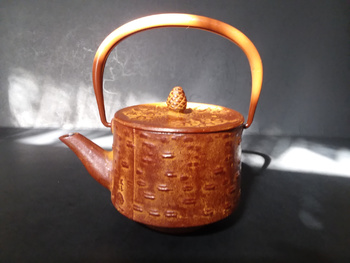 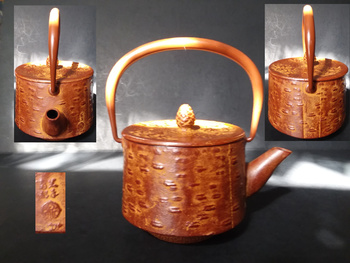 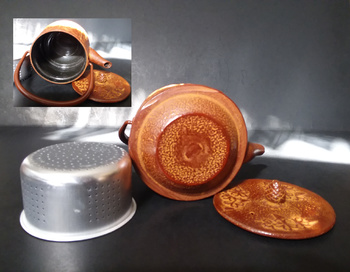 This Oigen cherry bark themed Japanese kyusu is about 3" high minus the handle and about 3.25" in diameter minus the spout. There is a maker mark to the right of the spout when facing the pot. It is either new or new old stock, not sure which, is marked and came in the original cardboard box. It weighed in at 1 lb 6.5 ounces. I found another new, boxed kyusu from another seller in Japan who described this as "Seieidou OIGEN Nanbu Tekki Kyusu Sakurahide Cun". I don't know what "Seieidou" means and could not translate it. The marking on the box mine came in was different, but the marks on the two kyusu are identical. Mine was purchased directly from a seller in Japan. The seller neglected to mention it came in its original box, a nice surprise.

Cherry bark is a very popular medium for tea related paraphernalia like tea scoops and tea caddies and I occasionally see these cherry bark themed iron kyusu and have wanted one. I found another nice example from a U.S. which arrived yesterday. There was this really bright light coming in my windows today and I vaguely remember that it is sometimes like that, but not recently. I may redo the images when we get a less bright day.