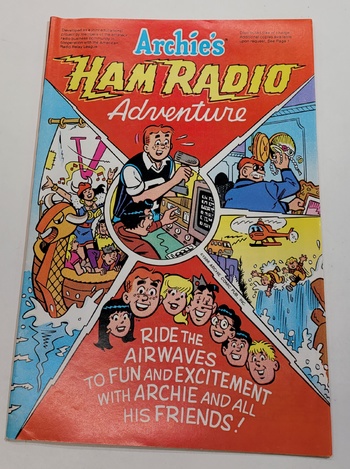 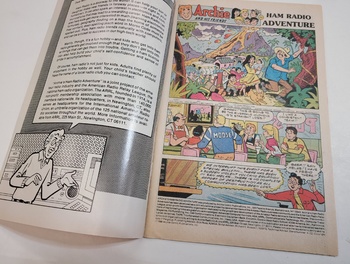 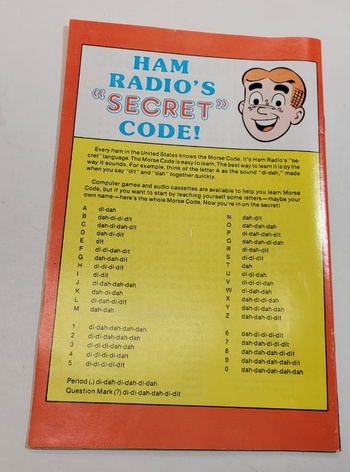 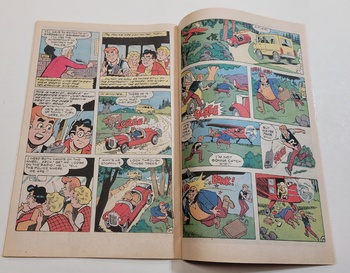 I'm sure I got this from dad or at one of the yearly Ham Fests that the Radio Club of Tacoma(W7DK) put on. This was an attempt to get younger people involved in the hobby.

It follows the mis-adventures of the Archie's crew and of course Ham Radio saves the day.

There's a page in the back with a mailer for: Archie's Radio Club, Sponsored by the ARRL-
American Radio Relay League- **see below**

The last picture in the upper left scene, the guy is saying he'll use the autopatch to contact the police. The autopatch could access phone repeaters while you were driving. Normally if you wre at home, you would just use your home phone. It was to be used for emergencies or private phone calls. You were not supposed to call commercial businesses using the system and of course every ham could listen in.

I remember dad using the autopatch to call mom and tell her we were on our way home. Remember this was before people had cell phones. In the early days he had built a tone box. It was a box of electronics about the size of a brick. It had a push button key pad like a telephone. He would use the keypad to dial the number to access the phone repeater. The box would give tones for each number pushed...I'm sure you remember dialing on an old telephone? All this while driving and keying the mic! Later technology offered built in keypads in your microphone.

**ARRL
Co-founded on April 6, 1914, The American Radio Relay League (ARRL) is the national association for amateur radio, connecting hams around the U.S. with news, information and resources.

W7DK - THE RADIO CLUB OF TACOMA
The Radio Club of Tacoma is one of the oldest continuously operating amateur radio clubs in the United States.

Located in Tacoma, Pierce County, Washington State, the Club provides Emergency Communications, Education, and a gathering place for amateur operators in the community. The Club owns its own property (aka the Clubhouse).