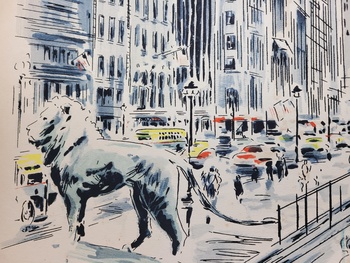 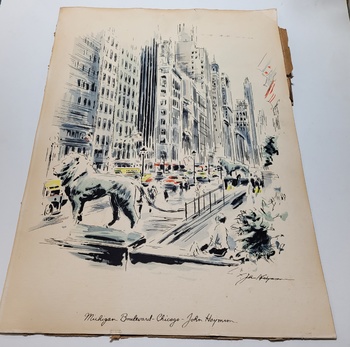 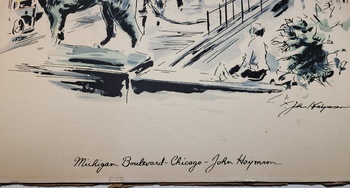 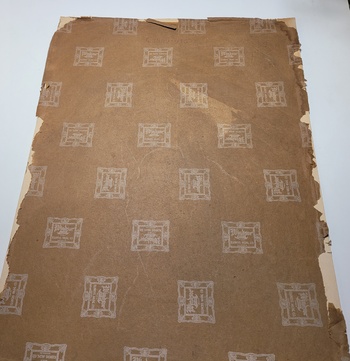 Picked this up with a group of hand picked artwork. I looked at it really close because he made a lot of prints. From what I understand, the prints were on smooth paper, which this is not. I also looked closely with a loop and there are no dots and you can feel the texture. So even though it's got some condition issues, I got a steal for $10!

WAR!
"Born in 1902 in Vienna, Austria, Haymson went on to attend the Vienna Academy of Fine Arts and worked as both a stage designer and fabric painter throughout Europe. In 1939, the artist fled Austria following the Nazi occupation and settled in New York, where he taught for a number of years at the Parsons School of Design."

MULTIMEDIA
Haymson worked with a variety of media, including lithography, watercolor, and oil paint.

PLACE OF HONOR
Haymson’s works are in the collection of the Smithsonian American Art Museum in Washington, D.C.

SMART BUSINESS
"Haymson was represented by the New York Graphic Society (a major publisher of the mid 20th century), as well as Aaron Ashley, Inc. Haymson would provide them with selected watercolors, and they would produce the printed copies for resale. He traveled all over the world, including many US cities, where he produced dozens of watercolors in each place. Then individual pieces were selected for reprint, usually by Aaron Ashley. As a commercial illustrator/decorative artist, he really specialized in famous places and monuments, knowing that the nostalgia involved would sell a lot of paintings and prints."