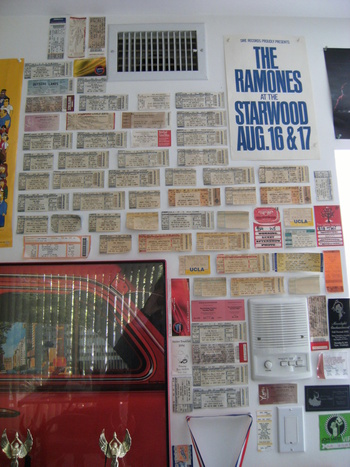 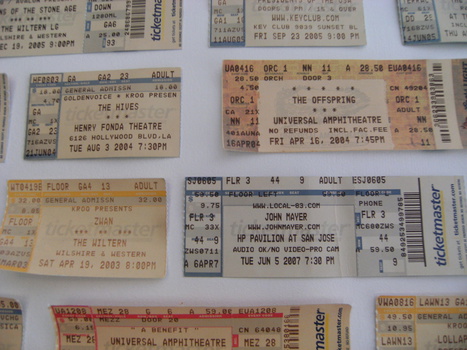 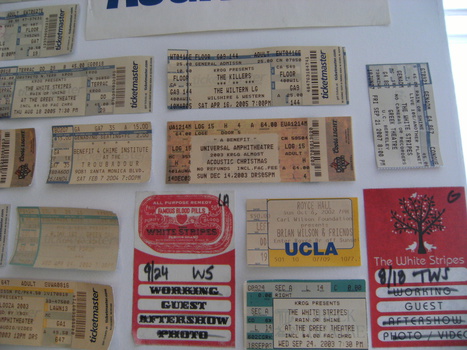 This is one of the walls in my room back home, which is the proud "display case" for the ticket stubs of all the concerts I've ever been to. (There are a few stubs missing, though---all my signed stubs are in my photo album, and I don't have the stubs from my first two concerts, since I was too young to think about saving them. I also don't have the stubs for shows where I had to trade my ticket for a mosh pit wristband, alas.)

The oldest one on here is from Halloween, 2001, when I saw 311 at the Universal Amphitheater (now called the Gibson Amphitheater, alas) in Los Angeles. You can't even read the type on it anymore! (One day I'll have to post my dad's collection of ticket stubs, which dates back to the '60s and '70s and has some really famous names in it at small venues, like Tom Petty and the Heartbreakers at the Whisky on Sunset Strip.)

Some other highlights: two backstage passes from two different White Stripes concerts at the Greek in LA (the red rectangles in the third picture), a backstage pass from a John Mayer concert at the Shoreline in Mountain View, CA (the green square at the bottom right of the first image), and a vintage Ramones concert poster at top-right, which will get its own posting soon.

I've diluted the wall a little bit with some non-musical tickets (a Dodgers game stub, a couple play/Broadway stubs, the ticket to my senior prom, etc.), but the vast majority are from concerts. Unfortunately, they only tell the story of concerts big enough to be sold through Ticketmaster or Live Nation (mostly), but it's still a fun reminder to me of the music that's important in my life.