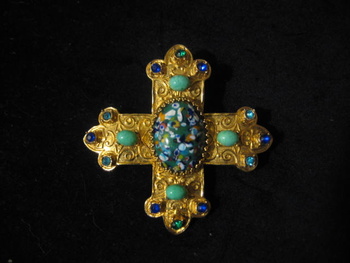 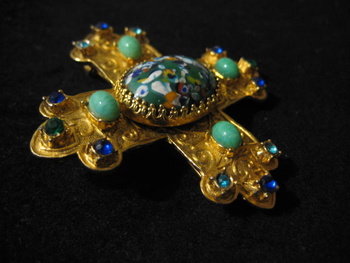 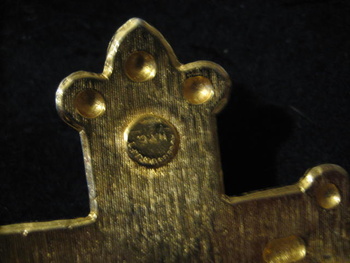 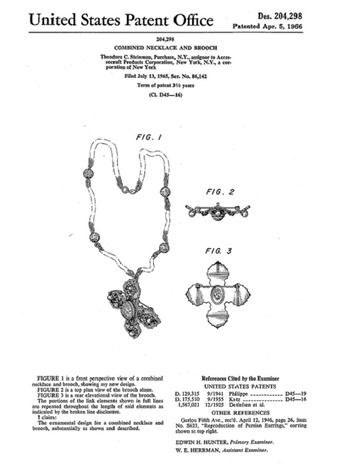 This is a beauty. there are blue and green rhinestones accenting the center stone in the middle of the golden cross,.
I did find some information on the company,: thank you "Estates in Time"
(Cite: https://estatesintime.com/jewelry-research/accessocraft-history/ )

The history of Accessocraft began when Edgar Rodelheimer and Theodore Steinman founded the company around 1930 in New York City, NY. Although the US Patent and Trademark Office places the company name’s first use to be in 1935. While receiving the trademark on December 24th,1940.
Despite not being as well known. The Brand produced jewelry with innovative style and quality. Resulting in higher prices than some better known designers. Most noteworthy was the comparison prices between Accessocraft and Coro. With some pieces as much as three times the cost of Coro in the 1940’s.
First gaining notoriety in the early 1940’s. Accessocraft Jewelry worked with the British War Relief Society and The Committee to Defend America by Aiding the Allies. Being one of the two companies to produce War Relief Pins during World War II. Sometimes called Society Pins, Accessocraft donating 24% of the selling price on each pin to the war effort, with the slogan “Send Guns – Not Sons”.2
While reserving the Accessocraft trade name for it’s metal jewelry line. The company had a bejeweled and gold plated plasticware line as well. items such as face powder compacts, comb cases, and cigarette cases to name a few. In August of 1941 Accessocraft filed for the trade name “Plastigold” to cover these plasticware produces. Stating they had used the name since 1940.4
It was the changes during the 1950’s which set the stage for Accessocraft boom in popularity. While trends switched from a rather reserved style to a much bolder styles.
Due to using the highest quality Imitation pearls, Czech glass, crystals, and colorful enamels Accessocraft gained a reputation for excellence. Ultimately It was this reputation which led to famous designer studios such as Anne Klien working with Accessocraft.
During the 1960, and 70’s Accessocraft produced some of their most popular designs, Pieces with influences of Gothic, Renaissance, and Byzantine lifted the brand to new heights.
Although the Brand continued to have a loyal following, slowly trends moved away form the company’s designs. Consequently causing the company to close in 1998.