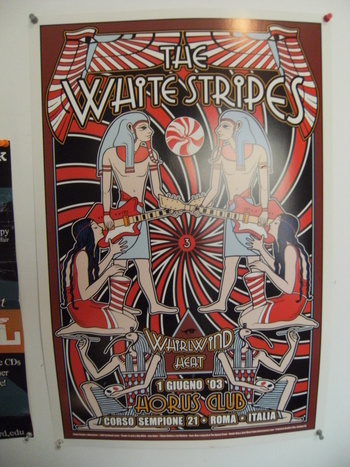 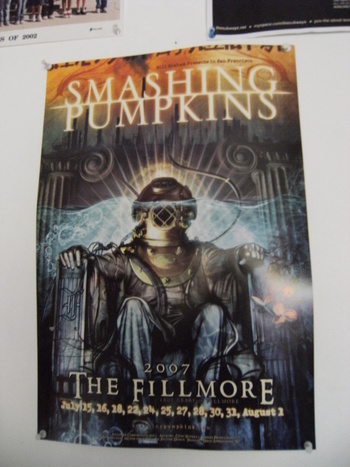 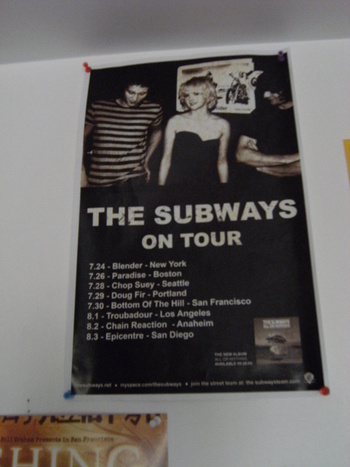 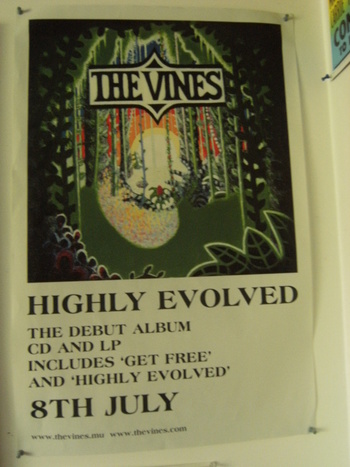 About half of my posters are at home; the other half are at school. These are some of the former.

The first photo is a White Stripes poster I picked up at Amoeba Records in LA for a 2003 concert in Arizona. I love the mix of Egyptian styles with the White Stripes aesthetic. Also sorta looks like plastic, which for some reason I like.

The second is a Smashing Pumpkins poster from their 2007 residency at the Fillmore, which was originally supposed to run for eight nights (July 15 - Aug 1) but was extended three extra nights. I was lucky enough to score tickets to the very last night with three friends, and we road-tripped up from LA to SF just to go. Even though the Pumpkins aren't the band they used to be, this was the best concert I've ever seen---two complete sets (one acoustic, one electric) with about 30 songs or so total, including some gems I thought I'd never hear live (like "Starla" and an amazingly re-arranged "Shame"). As with all Fillmore concerts, I got this poster after the show.

The Subways are an amazing band out of Britain. I think I stole this poster from the Troubador in LA when they played there a second time a couple years ago (which was unbelievable). This is from their "All or Nothing" album tour in 2008).

The last poster is also from Amoeba in LA, a promotional poster for the Vines' first album, "Highly Evolved" (2002, but I think I got this poster on the same night I got the White Stripes poster). The poster is a bit lazy (just the album cover plus text), but I love the band and the album artwork, so why not?