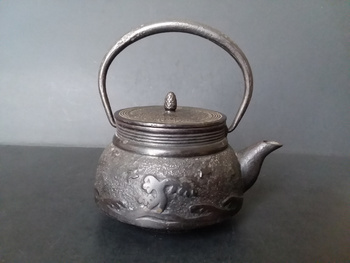 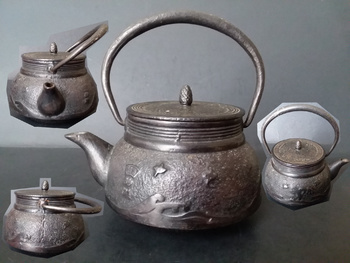 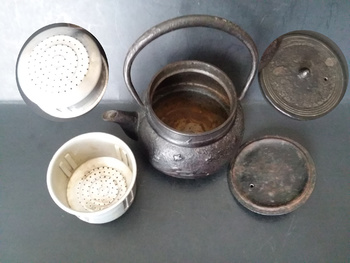 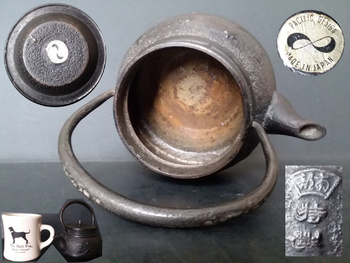 This little kyusu is 4.25" in diameter x 2.75" minus lid and handle and weighs 1 lb 2.5 ounces. It holds 250 ml of water, about 9 ounces. It is signed with a very well defined maker's mark. It is unlined and has been used but not abused. It has a "Pacific Designs" label with an infinity symbol on the bottom.

Waves and birds is a very common theme for kyusu and numerous Japanese foundries have their own version, but this is the first time that I have seen one which includes an island in the design. It is a very well made little kyusu and I discovered the benefits of the high neck on the body when measuring how much water it holds. When trying to pour too quickly from a kyusu which does not have a high neck like this one it is easy for hot water to leak out of the top around the lid and which can scald the hand holding the lid in place. The high neck largely eliminates this problem.

I could find nothing much about the importer, Pacific Designs, except that it was based in California and also imported Japanese pottery.

This little kyusu was only $20 shipped. It was the cheapest Japanese kyusu on an on line auction for many weeks. The seller's images were out of focus and made it look very poorly cared for, rusty inside and out, maybe so rusty that it might have a hole in it. I suspected it was unlined, which would account for the rusty appearance of the interior and rust on the outside of kyusus can be easily exaggerated when taking photos. I finally decided to take a chance since it cost so little and was very pleasantly surprised. I think it will clean up very nicely.

Note in the last image that I placed it next to an average size diner mug for a size comparison. It is tiny. I was very surprised to find it holds about nine ounces of water! The only really bad thing about this little guy is that it is very hard to get the infuser out. This may not be an issue since the capacity is so small that it should be emptied on a single pour. If it was a larger teapot, the concern would be that if the infuser was left in the pot the tea remaining in the pot would continue to steep and become bitter and undrinkable. I get at least three brews from each bunch of tea leaves I use so that would be quite wasteful. That means I normally have to remove the infuser from the kyusu within a couple of minutes of adding the hot water if it is not emptied in one pour.