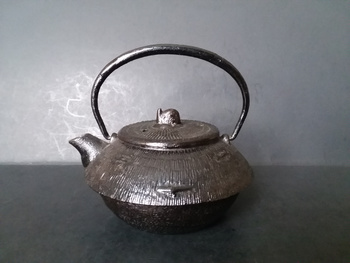 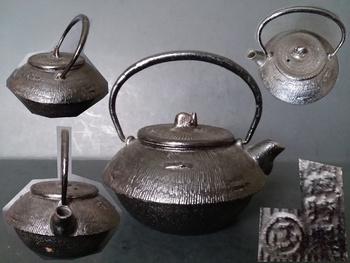 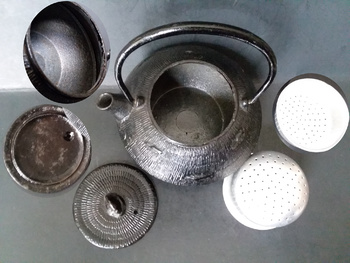 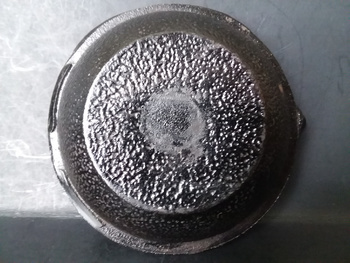 This kyusu is 5" in diameter, minus spout, and 2.5" high, minus lid. It weighs 1 lb 7.3 ounces and has a maker's mark. It is unlined. This is a re-post as my original post seems to have been deleted, for some reason.

After looking at this kyusu many times, I now think the finial on the lid may represent a stylized rabbit. The design of the exterior of the pot may have something to do with the natural surroundings a rabbit might live in. WAG (wild assed guess) on my part. I really don't know any of this. I have seen only one other example of this style of kyusu and no information accompanied it..

Unfortunately, I had a lot of research findings in the post, which are a bit fuzzy in my mind, now. I think that the seller remembered buying it in Japan in 1965. This kyusu has never been used. It was probably purchased in Japan as a souvenir and spent its life since in a china cabinet, on a bookshelf, etc. There is one rusty spot on the exterior and some light rust on the interior, all from the environment it was stored in for the past 55ish years.

It is a very nice example of an unlined, kyusu, which means that no urushi/enamel was applied to the interior to prevent rust and absorption of the tea brewed in it. The exterior urushi finish is very thick and shows no wear from handling or use, which makes reading the maker's mark very difficult. The interior finish exhibits rust proofing applied to non lined kyusu and tetsubins which is the result of applying high heat, to about 600 degrees. At the end of this heating process the exterior urushi finish was applied.

Not sure if I will use this one since it is a pristine example, though I will probably apply some green tea to the rusty areas to convert the rust and seal it.