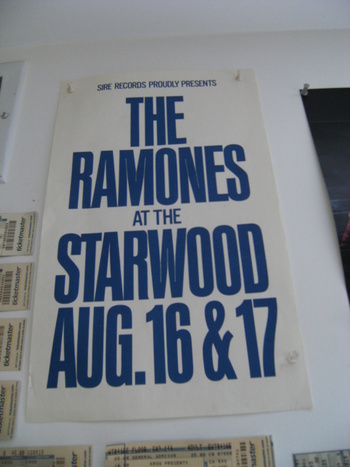 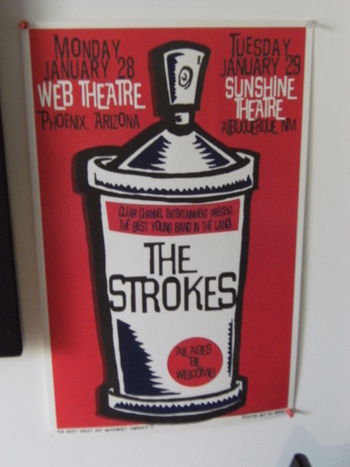 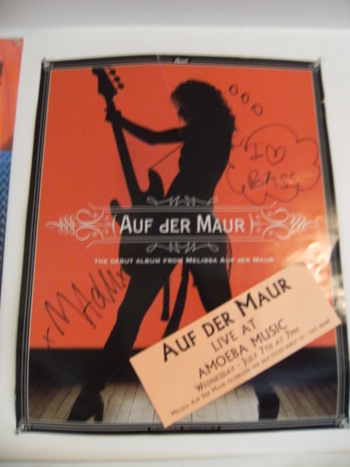 About half of my posters are at home; the other half are at school. These are some of the former.

The first poster here is from a couple Strokes gigs in early 2002. This may be my favorite poster that I personally own in terms of the artwork, especially the cheeky text---"The Best Young Band in the Land," "All Ages Be Welcome!" Really simple, but I dig the style a lot.

The next is from a free concert Melissa Auf der Maur (former bassist of Hole and, later, the Smashing Pumpkins) performed at Amoeba Records in LA to promote her solo album in 2004. (Apologies for the blurry photo.) She was great, and she was also nice enough to hang out after the show to sign the posters everyone (including me) was stealing from the walls of the store. She wrote "I <3 Bass" in a thought bubble next to her head and then signed it xMAdMx (which made me realize she has the best initials ever for a female rockstar).

The last poster is really my dad's but he gave it to me a few years ago, so I'm posting it here. It's from two gigs the Ramones played at LA's Starwood in 1976. I was careful to put the pushpins only in holes that were already there, since I don't want to damage this very cool vintage poster. Very simple, but gabba gabba hey---it's the Ramones!