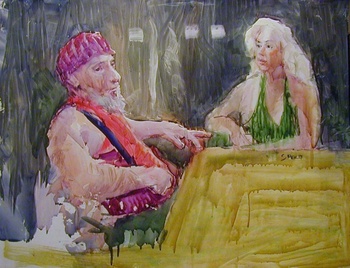 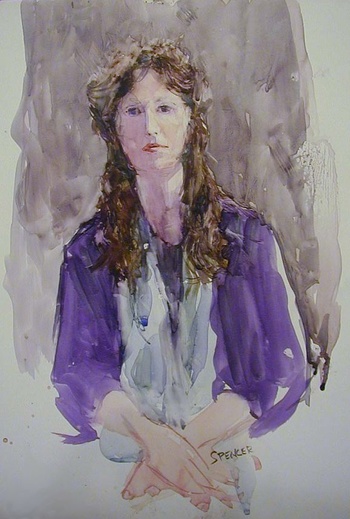 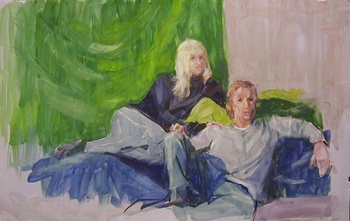 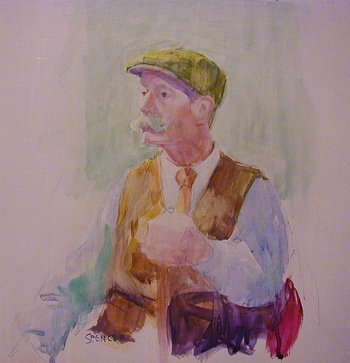 Gerald "Gerry" Warren Spencer was born 7 August 1923 in Shelly, Idaho, a son of Willis H. and Versailles Y. Graves Krupp Spencer. Willis was working as a cement laborer in Pomona, CA in 1930. Gerald's career as a painter started after his service in WWII.

Spencer studied at the Chouinard and Jebson Art Institutes. He exhibited widely in Southern California and is said to have won over 400 awards for his paintings between 1945 and 2008. I have a picture of a large pile of the medals that he won at exhibitions. He is mentioned in Edan Hughes "Artists in California, 1786-1940". For an artist who exhibited so long, so much, and won so many awards, it is odd that his is not very well listed. I like the expressive faces and poses of his subjects.

There was a large auction of his works after his death and I purchased a dozen or so paintings, all watercolors, except for one oil painting. It was the first time I had seen yupo paper, on which many of his watercolors were painted. Many of the paintings I bought were painted on both sides.

Gerry Spencer died 12 November 2008 in Garden Grove, CA. At the time of his death, Spencer was a member of the Cypress Art League, Cypress, CA. His obituary appeared in The Orange County Register:

Spencer, Gerald Warren, born August 7, 1923 in Shelly, Idaho, died peacefully in his sleep at his home in Garden Grove on November 12, 2008. After serving honorably in the US Army during World War II, Gerry followed his life long passion for art and enrolled at the Chouinard Art Institute in Los Angeles. His work has been exhibited and has won numerous awards over the years, he will be greatly missed by many in the art community. He is survived by his daughter, Gwyn Thek; his son-in-law, Willard Lones; his three granddaughters, Trisha, Sara, Jennifer and two great- granddaughters, Kaley and Keera. A celebration of life memorial will be held in January. In lieu of flowers, please make a charitable donation to the American Heart Association.

2. unnamed, Gerald Spencer, 18" x 24", watercolor. This painting is painted on the reverse of the the first painting. Spencer was apparently thrifty and often painted on both sides of the sheet of paper. He also often signed both sides as finished works, like these two. He often practiced on one or both sides, sometime signing or not signing either side. Both sides of this work seem to be finished works, though to frame the painting of the woman would likely require significantly trimming the other side.

3. unnamed, Gerald Spencer, 15" x 22", watercolor. I like this one because it captures the feel of the early 1970s so well in an understated way, with the woman in a granny dress and the man with long hair. Green was a big color in the 1960s and 1970s, especially for things like art glass. Glass of this color dominates the colors of factory art glass produced during this time. This kind of feels like a 1970 version of American Gothic to me.

4. unnamed, Gerald Spencer, 15"x 22", watercolor. This image was painted on the back of the painting above. It was a nice surprise as the seller did not mention it. I actually like it better than the image the seller featured. The main part of the image is much more narrow than the sheet it is painted on and properly displaying it would require severely trimming the painting on the other side. The whole sheet is painted in a pinkish background, though. Both sides are signed and I believe were meant to be finished paintings. 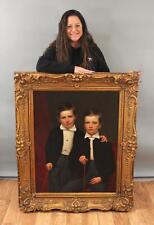