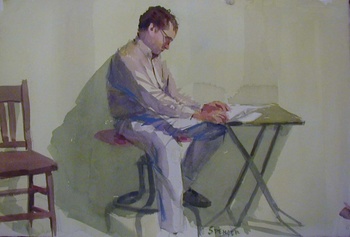 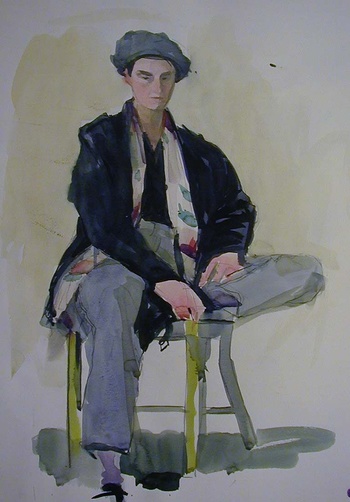 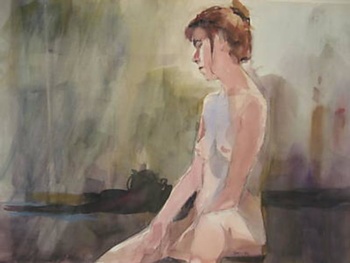 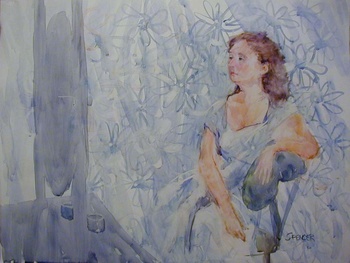 Here are a few more Gerald Spencer paintings from my collection.

1. unnamed, Gerald Spencer, 15" x 22", watercolor. I call this one "The Reader". Not sure if Spencer's work was cataloged and if any of these paintings were named. This one is painted only on one side. A seller on ebay offered several dozen of Spencer's paintings in February and March of 2009, the source for all of these paintings. The seller also had what he estimated were a third of the 400 awards that Spencer had won in his lifetime.

2. unnamed, Gerald Spencer, 15" x 22", watercolor. I bought several examples of Spencer's unsigned practice works. They are painted on both sides of a single sheet and not signed, though the man or woman in the beret fills one whole side and in my opinion could be considered a finished work. This one always reminds me of a friend who was a professional dancer. She was a tall, lanky women who often wore a beret. Even Spencer's practice works were very expressive, filled with emotion and action.

3. unnamed, Gerald Spencer, 15" x 22", watercolor. Spencer painted a goodly number of nudes. His knowledge of anatomy was pretty good, except for hands and feet. To do that well, a knowledge of the bone and muscle structure of those appendages is needed. Few artists can do hands and feet really well.

4. unnamed, Gerald Spencer, 15" x 22", watercolor. Spencer's works were often surreal. One of his real strengths was combining facial expression with the pose of his subject to convey an emotional message. 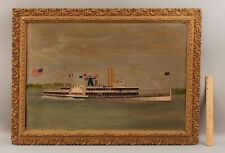 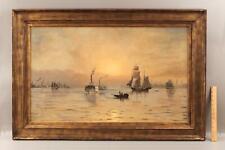 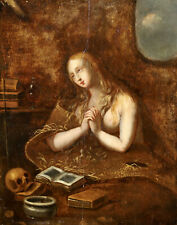