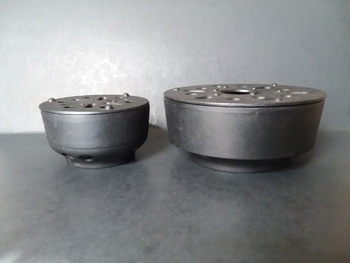 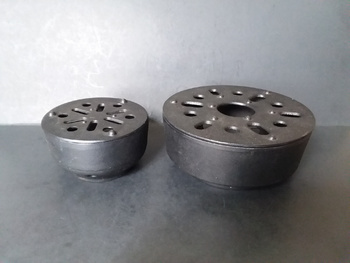 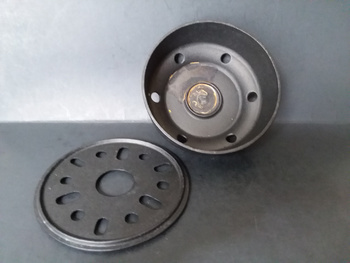 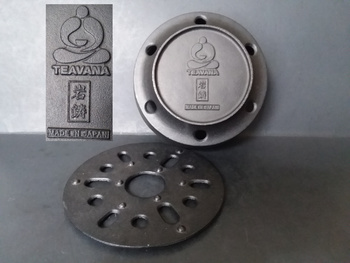 What's wrong? Me! My mistaken assumption. The large warmer is huge! It measures 6.25" in diameter x 2.75" high and weighs 3 lbs 1 ounce. It is a monster. It was part of the two nabeshiki, two warmer lot that I purchased a few weeks ago. The reason I wanted this piece was to use as a plinth for my kyusu collection shelf to create some different heights on the shelf so I could squeeze one or two more onto the shelf. The seller included no measurements in their description and did not provide photos which gave a useful perspective. I wrongly assumed it was the same size as one I posted on CW a few weeks ago which I compare it to in images 1 & 2. I did not realize that these were made in this size.

I would never use a candle warmer with a kyusu due to the discoloration it causes to the bottom of the kyusu and potential for damage to the enamel lining, but they are useful for displaying kyusu. Even so, this warmer is so large that it is unlikely that a tealight candle would generate enough heat to warm anything. I guess a votive candle could be used... I guess I can use it for displaying my large tetsubin which fits on it very nicely...

It is very useful for showing the connection between Teavana and Iwachu and has a very clear mark, because it is sooooooo large. The other three items in the lot were all gems so I guess I can survive this lump of coal. If I had realized it was so large, I would still have bought this lot as it was a bargain price and the other three pieces are all things I really wanted. Not sure what I will do with it.