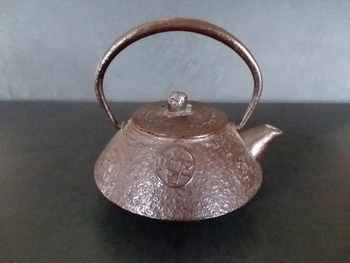 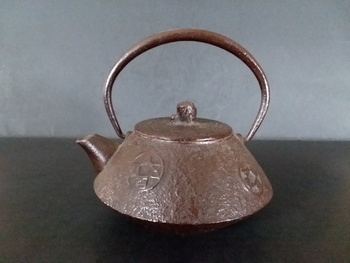 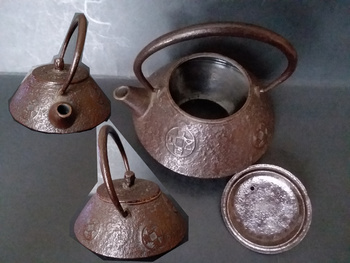 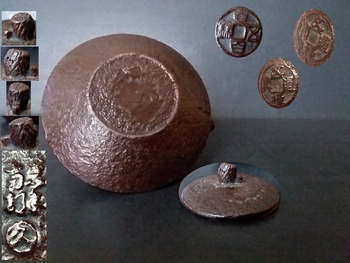 This coin themed kyusu is 5" in diameter x 2.5" high, minus lid and spout. It is marked and weighs 1 lb 5 ounces. The shape is a bit atypical but it is well made with a very unusual finial on the lid. I am sure that it once had a strainer but that has gone missing. There is a bit of rust on the rim of the pot and two small rust spots on the urushi lining which I have not attempted to clean up, yet. The maker is unidentified, though the mark is very clear. The surface finish is intentionally very rough but the lighting here was not too good today so my images do not show that very well, so I may try to get some better images.

The color of the urushi lining suggests to me that this is an older kyusu, perhaps as old as the 1950s or 1960s. There are two styles of coins depicted on this kyusu. I am still on the lookout for some common themed kyusu for bargain prices and found this one for less than $30 shipped, so grabbed it.

The seller advertised it as an antique from a now closed high end Asian antique store in Seattle, but I found a YouTube video created for the closing of the store in 2012 which showed it to be typical antique store with a grab bag of inventory in a somewhat run down building. No doubt they had some good stuff and some junk. This is not an antique kyusu and probably barely vintage, if that, but still a nice little pot and I was very happy to add it to my pile.

One other reason that I was really interested in this kyusu is that the maker's mark incorporates a mark similar to that of a well known Japanese art glass artist. Maybe that is a coincidence, however, and I am still researching this. If it turns out be connected to that artist, I will update my post at a later date to reflect that, but will not share the artist's name until then as I don't want to create any confusion about this artist's work.