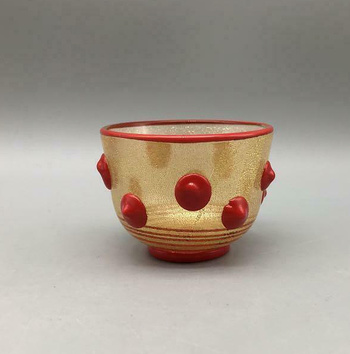 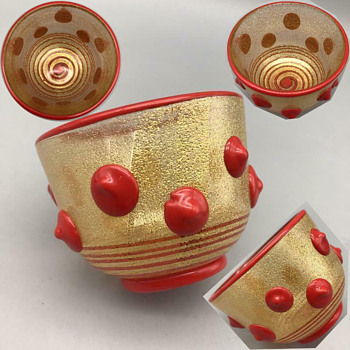 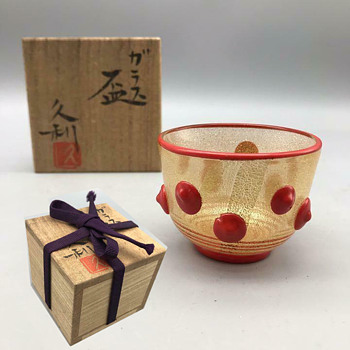 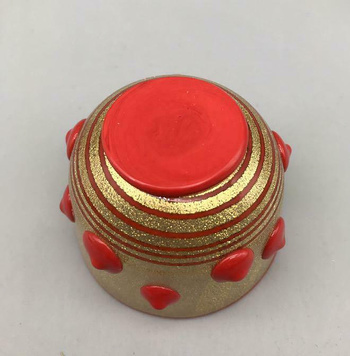 This small ochoko by Iwata Hisatoshi is 2" high x 2.5" in diameter and came with its original signed tomobako. It is made of three layers of glass with gold leaf in the middle layer and is decorated with red glass accents. It is a very small piece but complicated in a very controlled way. It is disconcertingly heavy for its modest size. I was surprised and pleased to find, when it arrived, that it included its original ukon-fu (turmeric cloth), a printed card and artist signed note on fine paper, none of which was shown or mentioned in the dealer's description. It appears that it has not been out of its box much, if at all. I have an unopened bottle of sake, so will christen it and then put it away.

Iwata Hisatoshi is also known as Iwata Kuri. I don't know why that is. Kuri is the Japanese word for chestnut, and there is a lot of symbolism associated with the chesnut and its tree in Japan, but nothing that explains to me the reason for this nickname. Does anyone know why this is?

This was an interesting experience. I always keep on the lookout for affordable Japanese art glass and regularly keyword search for certain Japanese glass artists. I found an online auction from Japan for this cup and then found another auction which had the same images hosted by another seller but the asking price was about doubled. Huh, looked like some kind of scam so I dug in a bit deeper to figure out what was going on. The seller with the lower price had been a member of the auction service since December 2019, had around 500 hundred feedbacks, all positive, and had about 2500 items in their store, a wide range of items, electronics, collectible figures, etc. The other seller had been a member of the auction service since April 2019, had less then 50 feedbacks, all positive, and about 1000 items for sale, again a mixture of stuff. Hmmmm...

I decided to take a closer look at the seller with the fewest feedbacks and found several other items for which this seller also appeared to be using other sellers' images for the same items but was asking a higher price for them. I suspected at that point that this seller was offering items they did not have for sale and if someone bought it from them, they would then buy the item from the other seller using the money from their sale to pay for it. I have not seen that before. Not sure if that is a violation of the auction site's rules but guess that offering something for sale that you do not have is problematic.

I liked this piece but thought that the seller with the lower price was still asking too much for such a small piece and it had sat unbid on for awhile, probably because of the price and the multiple auctions with the same images that screamed "Scam!". The seller did not have a "best offer" option so I just sent them an email with an offer about 20% lower than they were asking and they accepted. We had a nice messaging exchange and I finally told them about this other seller and sent them a link to their auction. They checked it out and confirmed that other seller did not have this item. I watched the auction of the seller with the higher price for a couple of days and their auction did not end, so I finally sent them a message asking for the dimensions of the cup, since it was not in their description. I soon got an reply from them that they had already "sold" the item and they ended the auction. My guess is they are offering a lot of other sellers' items for sale but not monitoring their auctions to see if the items are still available. Suddenly they have about 200 less items for sale.... 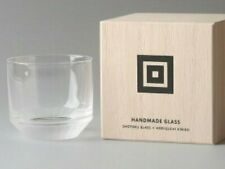