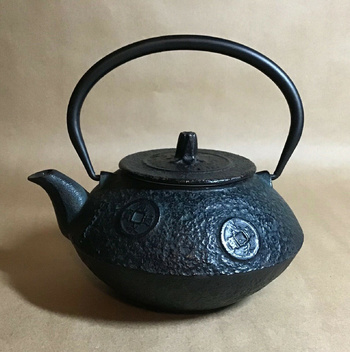 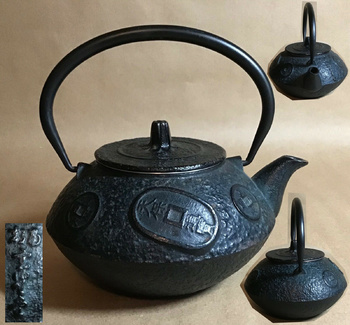 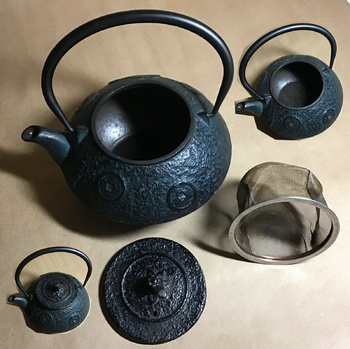 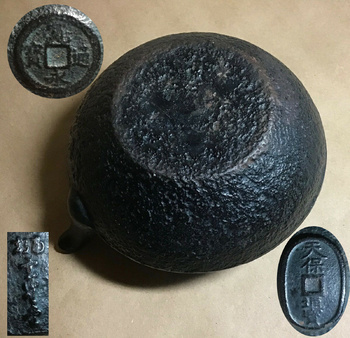 This Japanese coin themed tetsu (cast iron) kyusu is 3.5" high x 5.75" in diameter minus handle and spout. It holds 24 ounces of water and has its original infuser. The urushi lining is very thin and the interior is rough on the inside top and has many sand like inclusions. That being said, the coverage is complete and there is no rust inside. Not seen this before on such a nicely made tetsu kyusu. Marked, made by Nanbu Ho-Sei-Do, Oitomi, Japan. I was able to identify the maker of this tetsu-kyusu by sending an email to the on line seller of similar pots and asking them who made it!

I would appreciate hearing from anyone who knows of sources of reference materials for Japanese factory cast iron ware made in the Osu, Morioka, Yamagate, Aichi, Niigata and ? regions of Japan, especially tetsu-kyusu an tetsbuin. I may have accidentally purchased some studio made pots but still learning about the various markings on Japanese cast iron teapots.

https://japan-design.imazy.net/en/crafts/azmaya/nanbu-cast-iron-kettle/
"Oitomi, the manufacture of Nanbu tetsubin
Oitomi is an atelier which produces the Nanbu tetsubin of Azmaya. Oitomi is established in 1848. Since the establishment, it has produced the Nanbu tekki for about 170 years.

This Oitomi is the first atelier that exported the Nanbu tetsubin from Japan to the United States of America in 1954. Since then, Oitomi has been widely known as a representative of Nanbu tekki atelier.

Many other ateliers produce great cast iron teapots or kettles of Nanbu tekki in Iwate prefecture. However, Oitomi is characterized by the integrated manufacturing system. The craftsmen of Oitomi made design, mold, casting, polishing, and finishing. The integrated manufacturing system makes it possible to improve the item, and low cost. That is why Oitomi has won great popularity for 170 years."

This is a used kyusu but I found new ones for sale on zensuke.com. I found some very similar, and some direct copies, Chinese made pots on line. Though Japanese, this kyusu can be purchased new for about $70 plus tax with free shipping, so really inexpensive for a brand new Japanese cast iron kyusu. It is marked down from $99.95, though. I might not have bought mine if I had realized it is currently in production and not an older pot. Oh well, still a nice pot. Not advertising for zensuke, just wish I had done a bit more research before accepting the seller's offer, though I did pay much less for it. The seller saw I had been looking at it so sent me offer with about a 15% discount which put it in my sweet spot.

I went on a little buying spree over the past few days as it appears that I have resolved a major home repair issue for pennies instead of the many thousands of dollars I had expected to spend. I still have some work to do to completely resolve the issue and it will eventually cost me a few hundreds of dollars to resolve, and some sweat equity, but I have found a work around which allows me to do much of the work myself at my own pace. Yay!

In celebration, I found three unused Japanese kyusu, two definitely vintage (cast aluminum infusers) and one more recent, two arare (hobnail) and another cherry bark version all in my Mr. Scrooge price range, under $40. One was under $30 and another comes with a very nice trivet which sells new from Japan for $90. Hard to stop buying these when I can find nice ones so reasonably priced. All three are interesting versions of styles of pots I already have but good examples of pots by makers not currently in my collection. The kyusu in this post is the fourth celebratory kyusu and the least interesting to me. I (the Sucker) would not have pursued it if the seller had not made an offer. There is probably not another coin themed kyusu in my future.

Hey CW! I think we need a Japanese Metal Ware category as this pot does not fit well in another category and I have a pile of Japanese metal ware posted on CW! 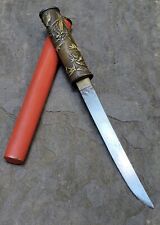