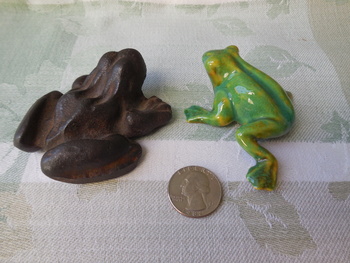 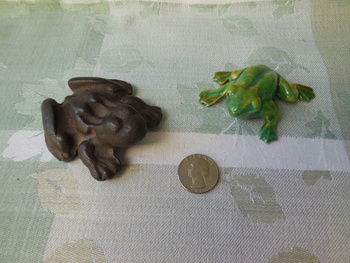 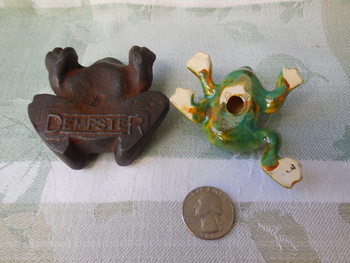 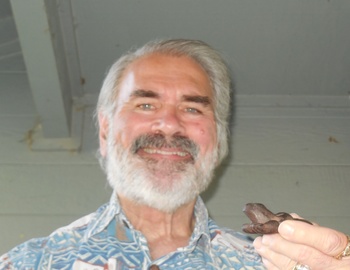 Sometimes it happens that way! Actually I got 3 Frogs, on the last Weekend in March, first was a Cast Iron Dempster Windmills Advertising Paperweight, second was a small blended Green glazed Pottery Frog Figurine/planter decoration, marked on the bottom back foot USA, and third was a Mc Coy Pottery Frog Planter, that I will post with more Pottery Pieces that I found! :^D
Here's some information that I found on line, about Dempster Windmills:
"Dempster Industries originally known as Dempster Mill Manufacturing Company was founded in 1878 by Charles B. Dempster and located in Beatrice, Nebraska. During this time the Civil War was over and many American and Immigrant families were heading west to take up a new life where the U.S. government was offering them homestead land. Mr. Dempster was aware of these homesteaders would need water pumps, machinery and tools to survive and prosper. A manufacturing plant was built to produce windmills, hand pumps, water well products and agricultural implements. During the years following, Dempster produced hundreds of various products and machines for the water and agricultural industries. These included windmills, hand pumps, well cylinders, towers, well drilling machines, fly wheel type gasoline engines, water storage tanks, piston pumps, centrifugal pumps, jet pumps, submersible water well pumps, and vertical turbine pumps.
During the World War II era, Dempster participated heavily in war production by producing more than 1 1/2 million 90-millimeter shells. In 1960, Investor Warren Buffett acquired the company from the Dempster family. During 1963, Dempster Mill Manufacturing Co. was sold to a group of investors and the name changed to Dempster Industries Incorporated. In 1985, the company was sold to Don Clark and was privately owned.
In 2008 Dempster Industries Incorporated was sold to Wallace and Felicia Davis."

Thank You for Looking, all Comments and Information about these Frogs, is appreciated! :^D

Thank You for always wearing a Mask, even if you already got the COVID19 Vaccine, We all need to, until this Pandemic is over! :^)

Antique Bronze Sculpture of Solid B...
$15