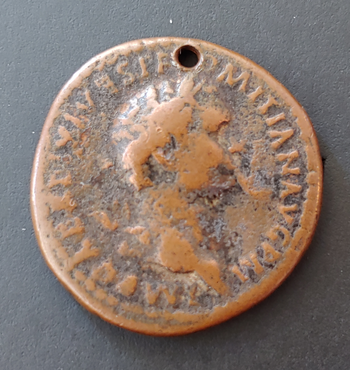 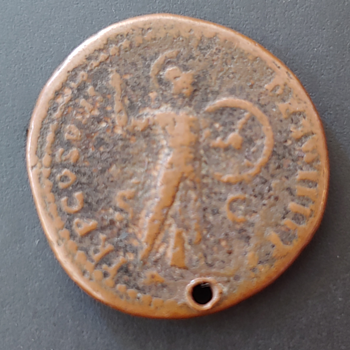 OK, I've tried with due diligence, online, to find a similar coin, but nothing quite matches this coin/token, of possible antiquity.

Given to me by a customer (J&B Cheever) decades ago, among a hoard of other coins (some dating back to King Edward 1307), was this piece. As an modern era coin collector (mostly), I initially thought the drilled hole reduced its' value substantially. However, as I did research on Roman era coinage, I realized it might be a bit more common to create a pendant, with "something special", to memorialize the item. However, I've never found an exact duplicate.

I should have added, it appears to be bronze, and is about the size of a U.S. quarter. 26mm / 6 grams

UPDATE 4/6/2021 - with the help of the respondent below, I think we can safely say we've narrowed it down to a Domitian Roman coin, from the first century ~86 a.d.