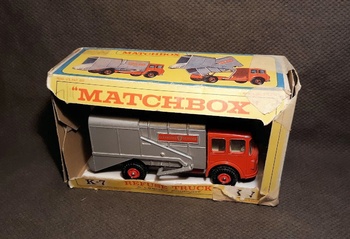 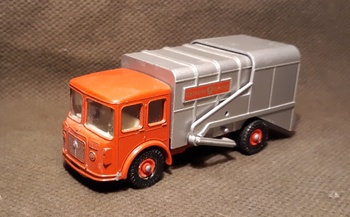 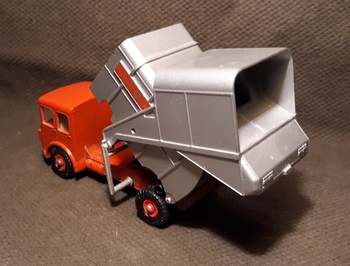 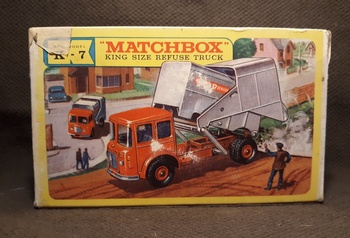 Another mundane model but a refuse (trash) truck is actually a complex and expensive piece of equipment. More so than dump truck, or tipper truck as the English would say. At least they said so in the the 1960s. The decal on the sides of this truck say "Cleansing Service" as the English are a bit more polite about this sort of thing.
The model is a Shelvoke & Drewry Refuse Truck. It is almost the same as the regular sized MB-7 but that one has a Ford cab.
This model was introduced in 1967 and sold through 1973. In 1971it became a Superfast model so that puts this one within 1967-1970. But the box is the W1 which had a plastic insert. It was sold in 1967 and 1968 so that puts this one clearly at being from 1967 or 1968 which is close enough.
The best feature of this model is the scissors actions dump bed just like the smaller version as seen in figure 3. It is fairly complex for a toy. But that is the difference between a toy and model as a model is more complex.
As usual I have plenty of exciting items to post so be sure and check back. Stay tuned to this website and all that.