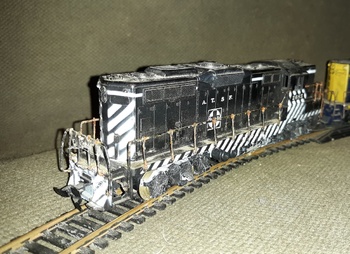 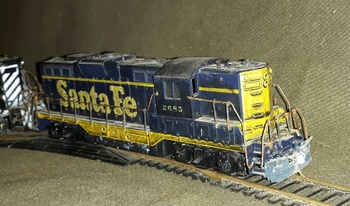 Last week I posted a Union Pacific GP9 locomotive. This time it is two different versions but both are Santa Fe aka ATSF. All were made by Athearn and are HO Gauge. Gauge refers to the width of the track, the scale of HO is 1/87. The yellow and dark blue was the standard color scheme for freight. The zebra stripe tended to be used for switching. The GP9 is a road switcher so they would be pulling a freight train long distance or working in the yard.
The Zebra stripe is facing backwards but they would often run them that way on a train. The engineers thought it was safer to have more of the locomotive in front of them. The front end was just a restroom with a bit of other equipment while the back had a rather large diesel engine. The blue and yellow locomotive has a snow plow added to it and has been weathered a bit.
Plenty more to come as usual.