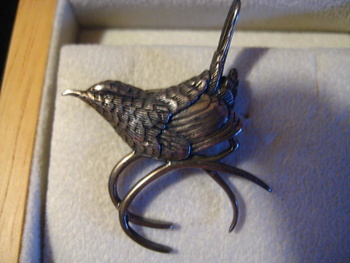 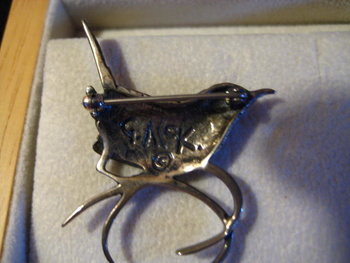 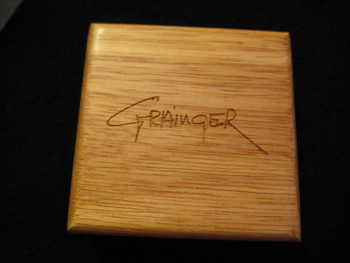 I have been posting "the BIRDS" in my jewelry collection recently, and appreciate all the loves for everyone. Now I have two new brooches from Victor Granger McCoy, that I want to share with CW folks. This artist does fantastic work and his attention to details excels. He is still living, new to many, worth watching his jewelry.

this is the CAROLINA WREN, handmade in sterling silver. Includes pendant converter Height: 1.5". the 2 brooches I have came with the attractive wooden box.

HISTORY: (https://amp.en.google-info.in/33907807/1/grainger-mckoy.html)
Victor Granger McCoy was born in Wilmington, North Carolina in 1947. After receiving an antique duck decoy from his grandmother in childhood, McCoy carved his first bird out of wood - sandpipers of cypress wood. He graduated in the class of 1965 High school Edmunds school Sumter South Carolina in 1965, he studied at Clemson University in South Carolina and holds a bachelors degree in architecture, which developed into a degree Zoology. After College, he took discipleship under the bird Carver Gilbert Magione.

Once McCoy learned to sculpt in bronze and gold, he expanded his repertoire in steel, bronze, silver, gold and platinum. for this, he carves wood and then uses lost-wax cast for the production of metal parts. Subsequently he began to create small sculptures and casting them into jewelry for his wife.

In 2010 a public Park called Swan lake iris gardens in Sumter, South Carolina, ordered Granger McCoy to create outdoor installation. "Recovery" is a statue in stainless steel, representing the wing of a Pintail duck in flight.

From September 2011 to January 2012, the high Museum of art in Atlanta was placed Granger McCoy exhibit, showcasing more than 30 of his sculptures and drawings. The Museum said that the sculptures McKoys "grip observant viewer with the optical illusion of trompe loeil illusion, rejecting at the same time justifying the trickery is often assumed that the trick in the style eye. And McCoy invites us to question, wonder, observe, and, above all, to revel in the beauty of its birds."