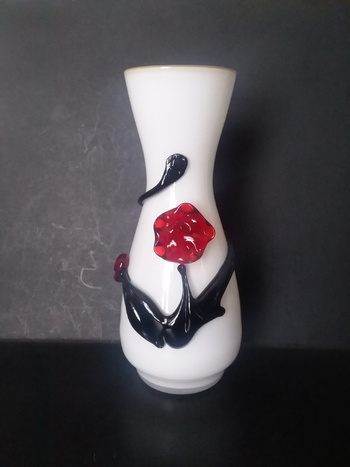 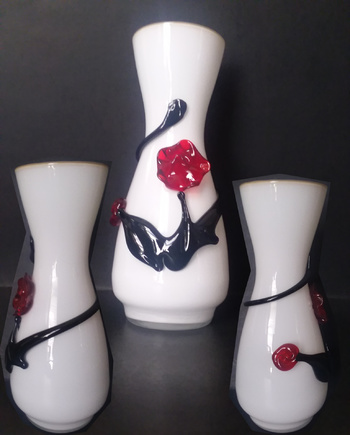 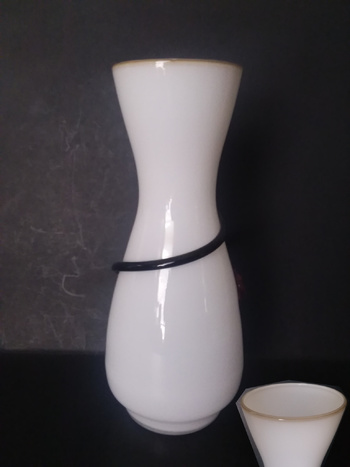 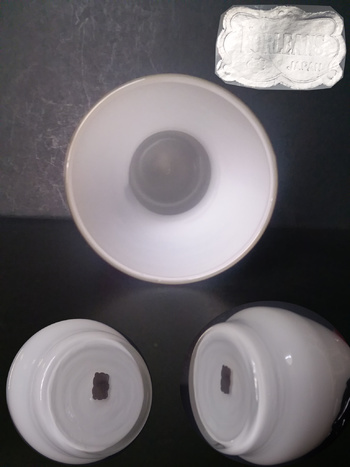 This vase is just over 10" (25.5 cm) high x 4" (10 cm) wide and weighs 1 lb 1 ounce (.5 kg). It is white glass cased in clear glass, probably mold blown, with an applied glass flower that encircles the vase and a brown tint to the rim of the vase. It has a silver foil Norleans label which I do not often see. The most common Norleans label is a silver and red foil label mounted on a paper backing. This vase dates to 1949-1962. The Japanese maker is not known.

This is a more modern take on the theme of a vase that Karen recently posted. It is perhaps more indicative of the Japanese influence on art glass design whereas Karen's example showed the European design influence on Japanese art glass. It may be representative of Japan's take on MCM. I have not spent a lot of time examining the evolution of Japanese art glass during the MCM period, though.

Norleans imported high quality glass and porcelain from Japan and Italy into the U.S. which often reflected the design styles of those countries in addition to copying design styles popular with Americans of the period. After 1962 products were also imported from Taiwan, Korea and Hong Kong. The actions of Sammons Enterprises after it acquired the UGC and Norleans trademarks are murky.

This vase was a runner up to the piece that I chose to represent Norleans imported Japanese art glass, since the style of this vase is a bit ambiguous. Here is a link to the post for the winner: 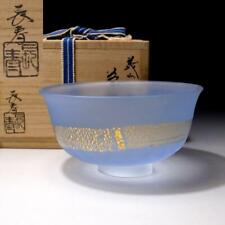