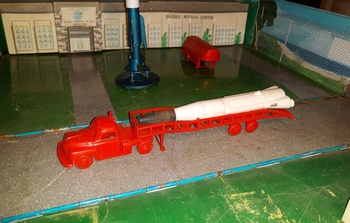 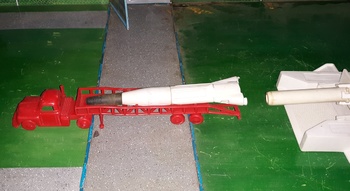 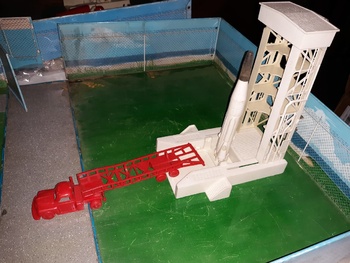 This is my favorite part of the Cape Kennedy Carry-All. It is the tractor trailer rocket transporter and launcher. The carry-all is from the later 1960s but this piece was originally made for the Cape Canaveral playset which I believe was first made in the late 1950s. Yes they are the same actual place but the playsets are a bit different.
With this series of photos I am trying to show how this works. Note there is also a spring involved to shoot it into space but I left it out to show how this works.
Photo #2 the truck is backing up to the launcher. The tube on the launcher is tilted down so the rocket can be loaded.
Photo #3 the rocket has been loaded onto the launcher.
Photo #4 the rocket is tilted up and ready for launch.
Begin countdown.