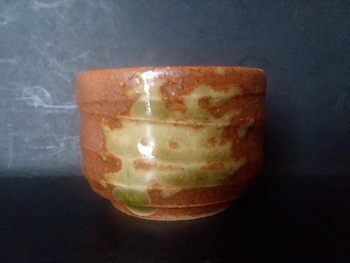 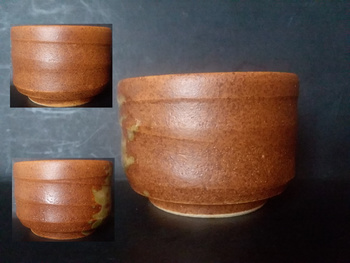 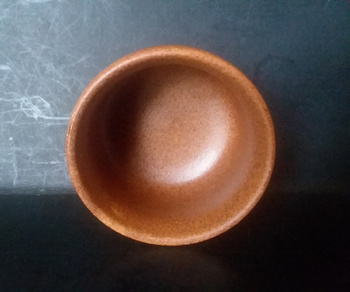 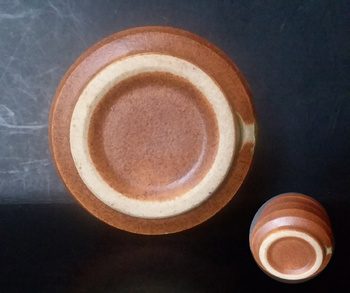 This Shino Ware pottery ochoko (sake cup) is 2.25" in diameter x 1.75" high. It has no maker's mark on the bottom, so is Mingei, or "folk art". It and its step sister Shino Ware cup arrived today. This one is pretty generic and seems unremarkable, but is still a nicely made cup and was hand decorated.

The sister cup is marked and more interesting, at first glance. The sister cup did lead me to more in depth research of Shino Ware and it finally dawned on me that the cup in this post is also Shino Ware, just at one end of the spectrum of finishes seen for this type of pottery. The better known Shino Ware finish has thick, rough glazes in white, red , rust and mixtures of those colors over white clay with prominent "pin holes" and other seeming defects in the glaze. The sister to this cup exhibited some of these characteristics but the glaze was smooth and homogeneous in color with small, unobtrusive "pin holes" in the glaze but still obviously Shino Ware.

Based on the quality of its step sister cup, I revised my estimate of the potential quality of this cup upwards and examined it more closely and noticed that the glaze had small "pin holes" over the surface, the first clue as to its origins. I started searching for similar examples and found several cups which were identified as Shino Ware, some in their original marked tomobako with accompanying literature. Whoever originally owned these two ochoko had good taste and probably purchased these cups together, possibly on a visit to the Gifu Prefecture where various Minoyaki kilns produce Shino Ware.

The cup in this post is only decorated on one side, but has interesting textures on all sides. Calling it "Not a mystery" since it is Mingei ware and the anonymity of the maker is a given.

It is a bit odd that I often find sellers with only two ochoko, which are different from each other, for sale. This pair were the only Japanese things this seller had in their items for sale. This has happened for me several times. Odd... 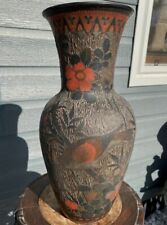