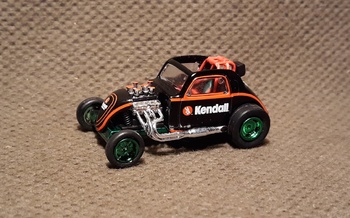 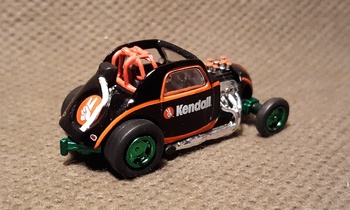 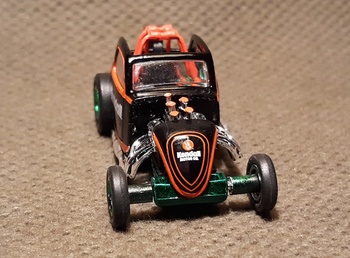 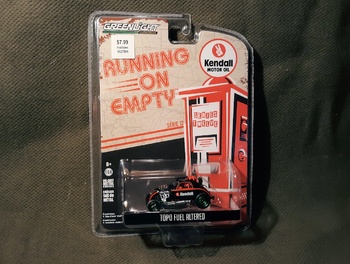 OK we have a few errors here. Starting off on the package it says "Topo Fuel Altered". I changed the Topo to Top. I think that was a typo on their part. Top Fuel then refers to the much longer Rail cars which would be what is called Top Fuel. This is however an Altered. I believe it would be a BB Fuel Altered as it is injected instead of supercharged. And I am assuming it is supposed to be a large block engine to make it BB instead of single B class. I tried to look this up but am going off the top of my head.
Altered used to be cars which were altered like the typical model T hot rod. Eventually they became completely fabricated like Funny Cars but had a very short wheel base. They were about the third fastest class of dragsters despite having all the same equipment. But the short wheelbase made them a bit unstable but fun to watch. Oh my I just spotted another error on the model itself. The headers should not lead to a single pipe on each side and should curve upwards the exhaust would eject from each header. Plus there shouldn't be any glass. It is more of a street rod. Anyway examples of diecast models are rare so I bought it. Not so hot on the green wheels either. Don't think those happened back then.
Looks like Greenlight red lighted on this one but I bought it anyway.