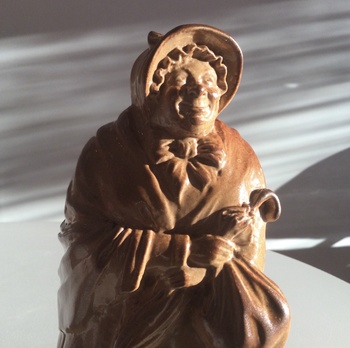 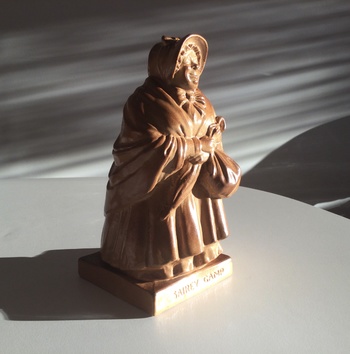 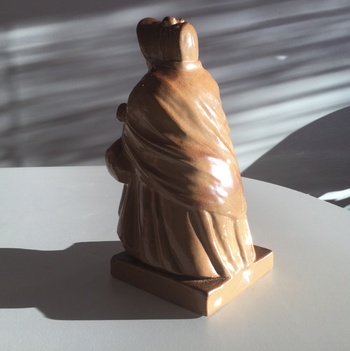 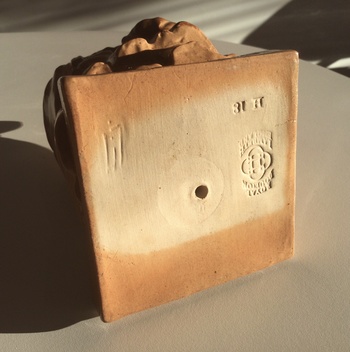 The H18 on the base with the Doulton Lambeth mark convinced me to buy this piece today at Vinnies. There were some strokes there too that are actually the mark of the designer Leslie Harradine. But she’s not a pretty piece of Doulton and that convinced me to take a punt and buy her.

Luckily she had a title on the base too : SAIRIE GAMP. At home I set about working out who Sairie (Sarah) was in the Doulton world.

Leslie Harradine was born Arthur (Leslie) Harradine (1887-1965). He joined Doulton Lambeth in 1902 at age 15 and had the talent and good fortune to work under the great George Tinworth while studying part-time at the Camberwell School of Arts under the sculptor Albert Toft. At Lambeth he also was influenced by Mark V. Marshall and John Broad.

“He loved Tinworth’s Merry Musicians and Broad’s Boer War soldier which inspired him to model his own series of salt-glazed stoneware soldiers. For the centenary of Dickens’ birth in 1912, he modelled a collection of popular characters from the novels which were slip-cast in white and brown stoneware. As well as figurines, he also modelled a portrait jug of Pecksniff which foreshadowed Noke’s character jug collection. Most of Harradine’s designs for the Lambeth pottery were allocated ‘H’ pattern numbers, which are incised on the base.” (https://www.pascoeandcompany.com/leslie-harradine?dir=asc&limit=12&order=name&p=9)

Sarah Gamp was a nurse in the novel Martin Chuzzlewit by Charles Dickens, first published as a serial in 1843–1844.
She was a caricature of the stereotypical, untrained, drunken nurse in the period before Florence Nightingale’s reforms in England.
Leslie went on to become one of Royal Doulton’s most prolific modellers producing figures from 1920 until the mid 1950s. But these early pieces are a thing in themselves and I might go looking for the others : Pickwick, Sam Weller, Pecksniff, Squeers & Micawber.