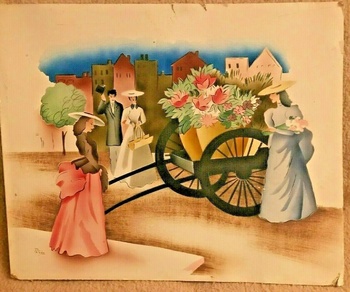 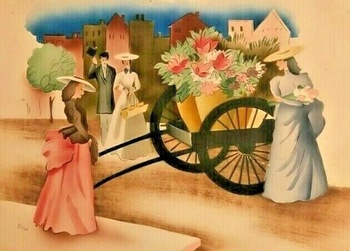 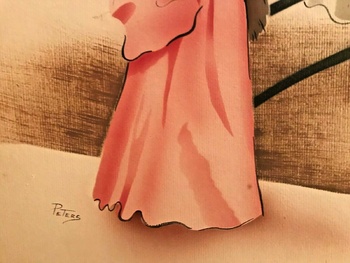 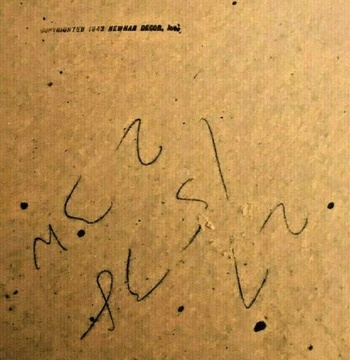 This unframed airbrushed watercolor or print on paper board art deco scene is signed "Peters." It measures 22" X 18." It dates to 1942. On both the back and front are stamps indicating it was produced for/by Newman Decor Inc (19 West 24th Street, NY, NY).

The firm was a high end home furnishings and art framing firm that operated from the 1930's to the early 1960's (by 1992 it had been dissolved). The firm also may also have operated under the name the Bernard Picture Company.

Newman Decor kept a roster of local artistic talent for its art production department. Some of the names seen are Harris, Roche, Dale, Guild, Roberts, Sue and Peters. To date have only been able to identify who Harris was/were-- the husband and wife team of Benjamin R. Harris (1904-1957) and Georgette Harris operating under the nome de brasse of Benjamin Jorj Harris.

As to "Peters" am uncertain who he/she was, though a likely candidate may be Charles Frederick Peters (1882-1948) who was born in Christiana Norway and immigrated to the New York City area sometime in the early 1900's. He was an illustrator, etcher and cartoonist. Among some of the publications in which his work appeared were Scribners, Harpers, Esquire and Century Magazine. He worked also as a commercial advertising artist for Rogers Peet and Company (NYC). The New York Times ran an obituary for him on June 22, 1948.