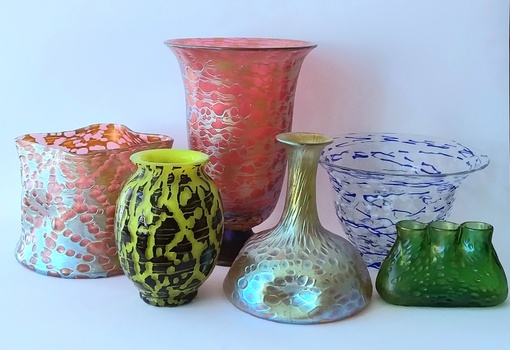 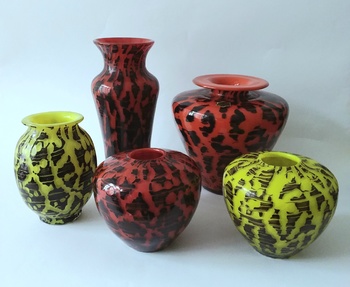 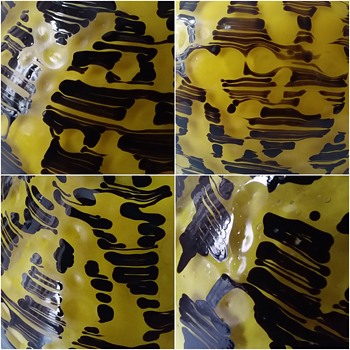 The basis of all these decors is the irregularly blown spherical shape, which runs through almost the entire production time of the Lötz company. From these pieces you can clearly see how small changes could result in new decors.
The simplest version based on this principle is the "Diaspora" decor (1902 the term diaspora was taken from the Greek and means dispersedness). In the case of "Diaspora silver iris", an additional layer of silver yellow was melted on.
In the case of the "Orbulin" decor, the pieces with the irregularly spherical depressions were wrapped with a silver thread, which tore when it was blown out, leaving behind these crater-shaped depressions.
"New Orbulin" was probably brought onto the market during Series III, it is a reissued decor. At that time, some Lötz decors had a renaissance. There is a bowl with a signature "OP", which could stand for Otto Prutscher. Perhaps some of these pieces (the shapes) were designed by Otto Prutscher and shown in a 1929 exhibition. The cut of the shown vase (PN III 5029) dates from 1930. But I am particularly interested in the hitherto unknown decor (around 1928) in red and yellow, which is also based on the same irregular spherical optical principle. The red or yellow glass was covered with a strong cover layer of colorless glass and pre-blown in the model with irregular spherical decoration, then spun with thick black threads, then rewarmed and gently blown out until the threads over the depressions broke. Then it was blown out in the smooth model and shaped freely. Since these pieces were blown out very strongly, the depressions can hardly be seen.They are recognizable on the collage and can be felt very well on the object. The yellow vase was also available in this form in pink with the "New Orbulin" decor (Lötz, Ricke I, no. 389). Research is still being conducted into this unknown decor. I haven't been able to find any further information about this decor for decades. If someone has any clues about a decor name or old sales documents, this would be very helpful. There are still some unanswered questions. Are there any other colors, for example green or blue? Many of these glasses have a sticker that says "Kunstglas". Some comments say that these pieces were not made in Klostermühle (I do not share this opinion) because a large part of the company burned down in 1930. 120 glass workers became unemployed, but operations resumed six months later. There is a possibility, as these products mostly appeared in Germany, that these vases were ordered from Lötz as a commission and sold in Germany as a German product, which has always been a common business model for the Lötz company (e.g. Richard, Veles, Lucidus, etc. .)
Another variant of this irregular spherical design is version C "Snowflakes". It too is based on the same principle. Here only white crumbs were applied and wiped off so that they only stuck in the depressions.