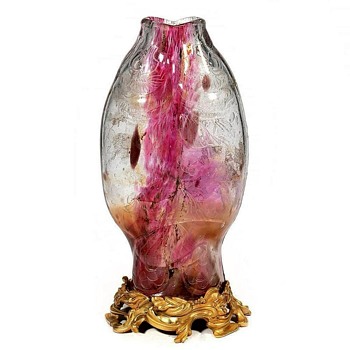 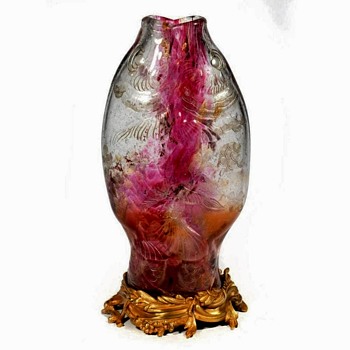 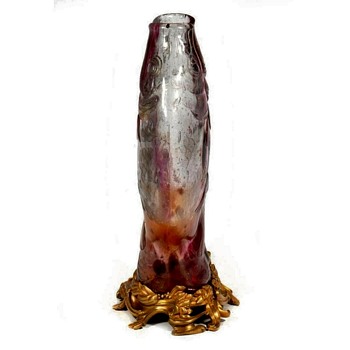 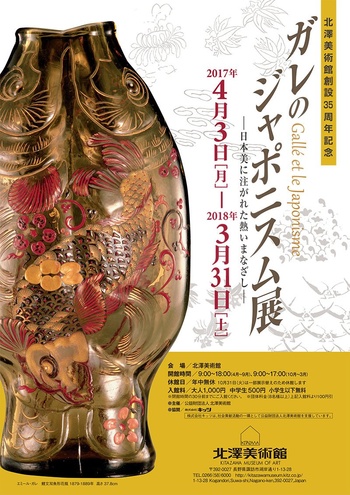 I would like to put the vase shown here with some few remarks into its historically context.

At the end of the 'Victorian Century' – in Germany called 'Historism' - glass production and décoration culminated and resulted into a nearly endless sequence of 'Revival Styles' beginning with 'Antique Roman', followed by 'New Gothic, Renaissance,' 2.nd Rococo and ending by an arbitrary mixture of them alltogether. It seems like a paradox that under the influence of Japanese (and Chinese) Art, especially ceramics, bronce vessels and woodcut prints, a new authentic style began to emerge in Europe, whereas Japan itself forgot its own history and opened its market for the US/European economics and modern industry products.

In the glass and ceramic productions in 1875-80's the 'Japanonism' style became successful with the designs of Eugene Rousseau. He did not just copy Japanese shapes and décors, but transformed them into expressive art objects. He was the first to use the simple shape of the double-carp (usually used in Japan, a fortune giving symbol of the union of a pair of lovers, as a ceramic gift on New Year) as a cut and polished crystal vase; one example could be seen in the Duesseldorf 'Glass Museum Hentrich' as part of the collection Gerda Koepff. In his glass, he used coloured inclusions of minerals, sometimes together with craquele techniques, to produce thickwalled items – technically made available by the new methods of steam glass blowing, patented by the company Appert Freres in Clichy, France – having the appearance of semi-precious stones. These luxury objects became visible centers in the living rooms of richer people, especially as the original exotic objects were not available on the market.

Under this influence Emile Galle made his own design of a similar double-carp vase in 1879. He mainly used marquetery techniques combined with acid etching to produce economically available products for a larger population. More exquisite products were refined by cutting and application of wonderful enamels in a large number of different styles like 'Persian, Japanese and mythological scenes' as well as of botanical objects like flowers or bilogicals like fishes, butterflies and many others. Only a very limited number (possibly only three #1-3) of his double-carp vases are known. The example exhibited in the Kitazawa Museum at Suwa, Japan – shown in foto 4 - carries the famous enamel of a carp, strongly influenced (actually almost a copy) by the Hokusai woodcut shown in vol. 13 of his 'Manga' (sketches). On one hand, this congenial combination of painting with shape is engenious, on the other side, it seems almost overloaded and the vase is clearly dominated by the enamel, only. In the vase shown in fotos 1-3, the brilliant, jewel like appearence of the crystal glass is eye-catching due to it's predominantly red mineral-like inclusions – obviously leaned from E. Rousseau's glass treatments – it is mainly supported by the glass cutting and polishing, enhancing the eyes, fins and scales, thus shaping the contours of the double-carp vase, which is finely contrasted by the 2.nd Rococo style mount.

For completeness sake, I mention the popular series of double-carp vases designed probably by E. Galle and made by Baccarat; in 1878 three different models were produced. From an artistic point of view they, by far, cannot compete with the above mentioned work.

Luxury pieces made by E. Galle, get today prices in between 250.000-500.000 $, The tremendous increase in price could be seen for example in the double-carp vase of the Kitazawa museum, the same piece with a mount similar to this vase, was sold by Sotheby's in 2013 for 55.000 € and then, one year later in France for more than 150.000 €. Today it would be placed within the top ranking pieces. This vase here has a large crack that extends nearly 2/3 around its base and it was offered by Turner Auctions in April 2021 starting at a low price of 50 $ without knowledge of, nor mentionig its Galle origin. Though damaged, I thougt that I would bide setting my maximum to about 1000 $, but on biding I actually finished as a underbider at 3200 $ (including fees, shipping to Germany, tax and customs this corresponds to 5000 $) and let the vase go to its happy winner. This was the very rare moment, I had the chance to obtain a unique Galle object for a reasonable price, but finally my financial possibilities were too limited.

This vase stands impressive 40 cm high (the glass vase itself is 38 cm) and the diameter is 15x10 cm.
The fotos 1-3 were those of Turner Auctions used for their internet auction in April 2021. The last foto shows a poster of the Galle vase at the Kitazawa Museum at Suma, Japan.