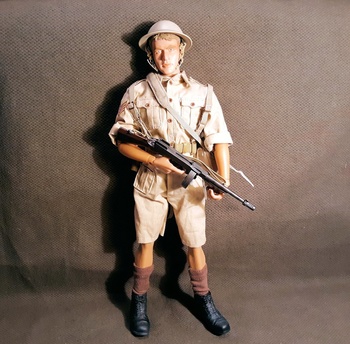 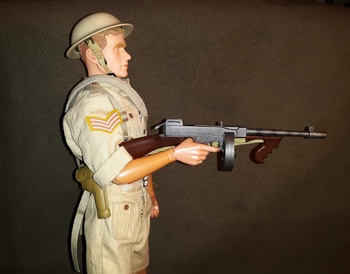 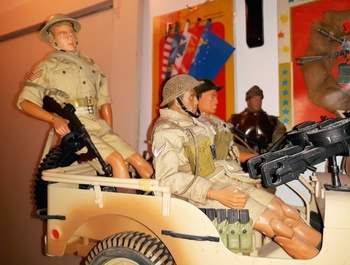 Another GI Joe that isn't a GI Joe. This figure is made by Dragon Models, this one is from 2002. Dragon is known for their highly detailed and impossible to build tank models. In the late 1990s they got into the 1/6 scale action figure market with highly detailed figures that are impossible to put together. As far as I know all their figures are from WWII. On this figure there were some anklet webs I can't figure out how to put on. The German figures are harder to get all their gear on because they were in real life. I am thinking Reggie is from a mechanized unit as he has little web gear. It is pretty much a bag which I think would carry a spare drum for the .45 Thompson submachine gun. Thompsons were expensive so he being a Sargent gets one. The drum is detachable and there is a round visible at the top of the drum. He also has a pistol which I am fairly sure is a Browning Hi Power which is an early high capacity 9mm. It is the most highly detailed 1/6 scale hand gun I have seen. The magazine is detachable, the slide moves back and forth and the hammer can be drawn back.
I have bought a lot of 1/6th (aka GI Joe) so there will be a fair amount of that coming up.