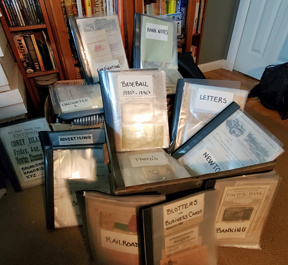 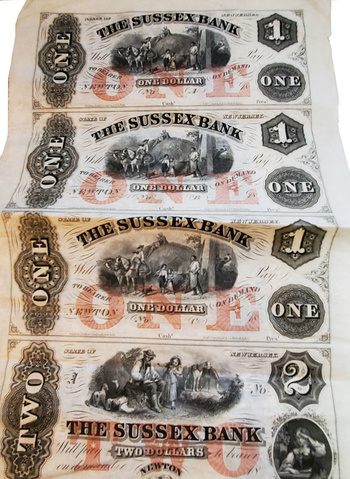 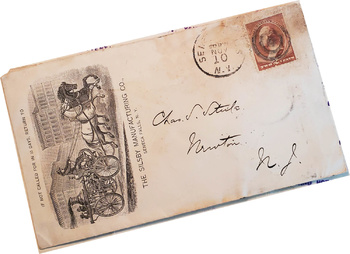 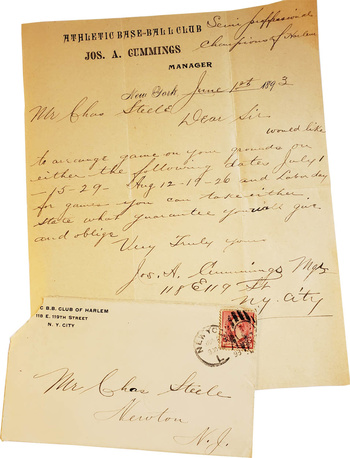 My name is Mark. I am here for a few reasons. To learn some things about what I have and to share them as well. Please note none of these items are for sale. I'd like to introduce folks to something I call the "Steele Box".

In the mid 1990's my wife worked as a manager in a bank in the town of Newton, NJ in Sussex County. I do not know the exact age of the building. The Original bank from where the "Steele Box" came from was across the square and it was called "The Sussex Bank". The bank building was located on the main square in the town. It was 3 or 4 stories tall and it had a large basement full of dark rooms. This was the kind of basement people just don't wander around in. It had a active 1 1/2 foot stream flowing through it, there were rats and other things around as well. It also had a fallout shelter with boxes and boxes of war rations in it. In the basement there was also an old vault that was no longer being used, it was always open. In it there were a number of things, including a box in which I still have.

In case you are wondering why I have the box it's because...
The management of the bank decided to sell the property.
In preparation they reached out to my wife who explained to them the situation in the basement is in dire need assistance.
In order to sell it the bank decided that the basement needed to be emptied and everything needed to be thrown away.
My wife then called the Newton Historical Society who came and took some things.
This is where I come in....
As the basement was been cleared out they basically looked at nothing, picked it up and threw it away into a dumpster outside. I cannot imagine all that was lost. The basement was room after room and seemed to have gone on forever
At the end of the day I would go up to see if there was anything that was worth saving from the dumpster. I went a few times and and I could see old news papers from the 1940's and so on, a lot of damp worn out bank papers, some of the rations, furniture, the list goes on and on.
Then one day my wife said the vault in the basement was next on the list to be clear out. The workers were instructed to throw everything into the into the dumpster and they did.
This is when I found the"Steele Box". It was on it's way to the trash heap and I grabbed it, little did I know what was inside.
The box had the another box sitting on top. In it is where I eventually found the a number of things that I would like to share with the folks here is that ok.

Interestingly enough I have done a lot of work looking into what I call the "Steele Box".
What is the "Steele Box"? I can tell you it is a box similar to a old milk box / storage container, wood handles and made of metal. It's about 18 inches front to back, 22 inches side to side and about 18 to 20 inches deep.
I named it the "Steele Box" because it is basically a time capsule for the 1880's from a Mr. Charles Steele.
Mr Charles Steel was a...
Banker
Firefighter
Railroad Engineer of some sort
Local Baseball Player
Fan of the New York City and local theatre as well
In the box there were...
Copper printing plates, one of which has the signature of George Washington on. Mt Vernon is currently researching it.
The box also had CDV photo's of actresses (Lotta Crabtree) from the California Gold Rush days taken by a well know photographer from New York City named Jeremiah Gurney. He was ranked up there Matthew Brady who happened to be the person who made the cases for Jeremiah's photos early on. As you know Matthew Brady then went on to take the famous photos which he is well known for of President Abraham Lincoln.
Employee time tables from the Lackawanna Railroad, Chicago and others.
Love letters.
A letter that is from a man he knew that was in Cape Horn, South Africa. From what I gather he was trying to evade being captured by the police.
Letters to bring electricity to Newton.
Papers, ledgers, and so on all tied to arranging local Baseball games in the area including New York City in such places as Coney Island.
The baseball team from Newton was made up mostly from the Newton Steamer Co. No. 1, firefighters from that time.
Broadside of the first kidnapping in the United States for ransom, Charles ("Charley") Brewster Ross.
Opera house floor plans from New York City, one of which was torn down and is now where Madison Square Garden is today.
Bill Heads and Broadsides.
Bank Checks
Bank notes that were used as currency before the Federal Reserve been into existence.
....and more. There are over 2,000 pieces of paper (Ephemera) in this box.

As you can see it's overwhelming.

I hope to get the chance to post some of what I have and I also hope to learn more them is folks have some knowledge of something that stands out. At the moment most of what was in the box is in protective sleeves and separated by category. Please know that the Steele box is actually steel or tin. It did rust while it was in the basement so some of the items in the box are in bad shape while others are not. Wish me luck. I know I am jumping into this head first. I hope not to post thinks in the wrong category so I will try my best to be consistent.

Since I see that I can use two tags I will use PAPER and then select a category that is the closets to what images I am posing.

For the first post I will include a pic of the box, and three different subject matters. If this is not the right forum or if you get tired of seeing post I completely understand and I will stop posting. If you would like to see more then please just say so. I am just looking for a place to be able to share what's in the box.

P.S. I just learned that the search allows you to easily find things I will use the "Steele Box" on all of my posts.