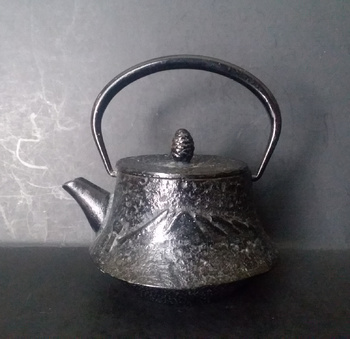 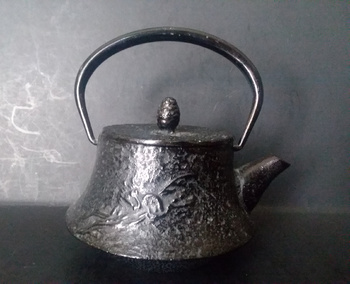 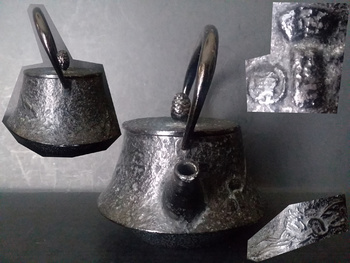 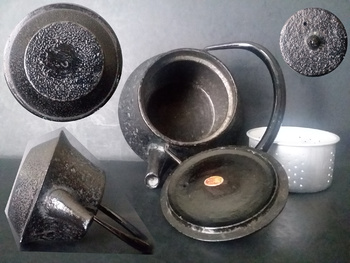 This uma yama (mountain horse) tetsu kyusu is 4" diameter x 3.75" high, minus spout and handle and weighs 1.5 lbs. It is marked to the right of the spout when facing the spout side of the pot. This tetsu kyusu has a mountain range on one side and a horse on the other side. As rhineisfine astutely pointed out, horses on Japanese tetusibin and tetsu kyusu are stylized and resemble those on Soma Ware pottery. This is true for the few examples that I have, anyway.

This is another souvenir tetsu kyusu, what I call paperweight pots, never used, probably bought as a souvenir on a trip to Japan or in some West Coast import shop in the second half of the 20th century. The latter is probably more likely due to the "Made in Japan" label under the lid.

Calling this style of pot yama uma (mountain horse) is my interpretation. There may be a real Japanese name for this style of pot, but I don't know what it is. The seller of this pot called it a Mt. Fuji design but I think is it a range of mountains, not Mt. Fuji which is a dormant volcano. The range is probably either the Hida, Kiso or Akaishi. This pot might possibly commemorate "Sarasara-goe" in 1584 in which a Samurai force crossed supposedly impassible mountain passes in the winter.

I do not know the maker and name of the design of this tetsu kyusu. It's a mystery!