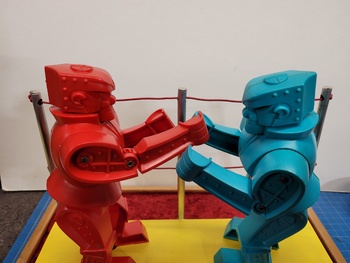 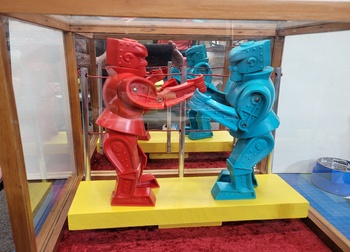 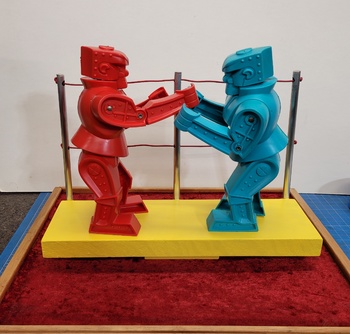 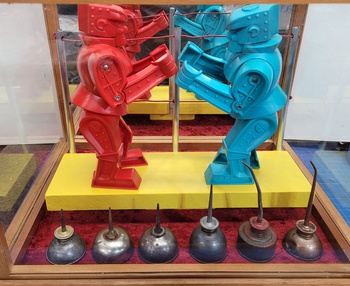 I have been packing these robots around since the 70s. I am the youngest, so they may be older than me? Not sure what happened to the ring? But I've always had this project in the back of my head. I was cleaning the garage for a remodel project and found these packed up.

Just finished yesterday...I cut and drilled the wood to fit in a display case, then decided to elevate the platform for more interest and possible lighting. I found some aluminum pieces in the workshop, so I cut and drilled those for ring posts. I needed a cap for the posts. I went simple...I used pieces of champagne cork(have some from previous projects), cut down and stuffed into the top...and capped them with metal thumbtacks. It fit perfectly and looks good.

I spray glued some red velvet left over from my "Vampire killing kit" I posted awhile back. I was going to add a Rock' Em Socks Em Robots logo, but they are so iconic, I decided it didn't need it.

I had an idea this morning...I may display some of my small oilers in the display.

Rock' Em Socks Em Robots
"The Rock'em Sock'em Robots, created by the Marx Toy Co. in 1964, features two towering figures, one red and one blue, set up inside a boxing ring. Players operate joysticks to make them punch each other until the head of one of the robots pops up, signaling the end of the round."

"The toy was inspired by boxing games that appeared in arcades in the early 1960s, using mannequins made of metal that would fall over if a player managed to hit the button on the chin of the opposing player's dummy. "

WHY ROBOTS?
"After some development, Glass decided to cancel the project in 1963 after the death of boxer Davey Moore in the ring. Burt Meyer felt that the toy was too good to go to waste, and suggested that they "de-humanize" the characters, making them robots that fall apart, rather than humanoid figures that fall over."