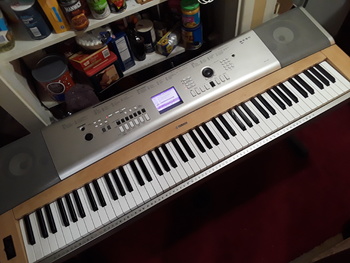 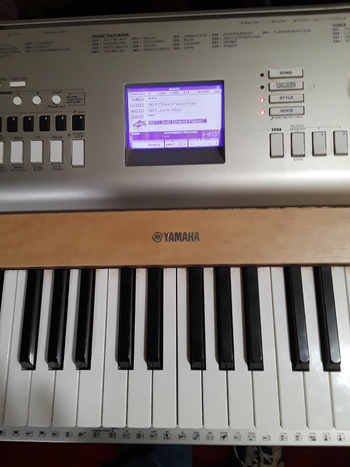 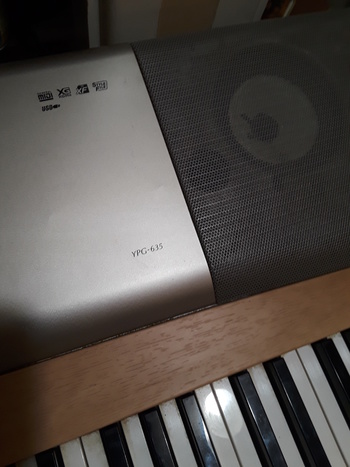 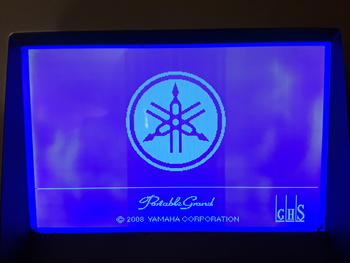 It's not "vintage" or even all that "old" by any standard I'm aware of (though with the rate today's tech seems to change for such things, maybe?) but it IS otherwise what we in my line of work refer to as a "PLD" (Piano-Like Device) in that it has 88 weighted keys of the correct size that can be used to generate a myriad of various "piano sounds". (and a whole bunch of other stuff, too, the sounds of which really aren't natural to come out of a box with keys like this, except that they do. . . ??)

Anyway. After years of not having any kind of keyboard instrument of my own in my home, I was getting tired of that situation. Of course I'd rather have a huge and heavy antique (player!!) piano but ain't likely to ever get either one of those *or* the space to put it if I *did* get it -- I've even entertained the idea of putting together a tiny pipe organ, which I could easily get enough parts etc. to do, but those take up even **more** space I don't got . . . ???

So when I spotted this recently at a local pawn shop I took note (sorry, unintentional bad pun) then went home and did a little looking around online for similar things, deciding their asking price was about twice too much than I'd pay. I shoulda forgot about it then but didn't... <groan> Went back there today and examined it a little closer...offered dude less than half his price and he declined but counteroffered, still too high for my taste so I declined that time and left the store again. Returned the final time about half an hour before closing with $50-less-than-counteroffer *cash* in my hand . . .

. . . and carried it outta there with me that time?!! :-) :-) :-) [after watching him deal with some other little dude trying desperately but unsuccessfully to get $100 for his (or at least somebody's) wristwatch...that was kinda amusing?!] I hope I didn't really pay too much...

It is a YAMAHA, model YPG-635. I haven't been able to decipher its serial# label (yes, it *has* one?!) to determine a date for the thing, (maybe 1989? the only series of #'s that kinda might be a date code?) and I don't even have a manual for it yet to tell me how to really *operate* the thing beyond its simple functions, but I think I'll be able to download that.

No, it ain't anybody's REAL piano, but its prolly close enough for my purposes of self amusement... ;-) :-)

Keyboards and Synthesizers
See all