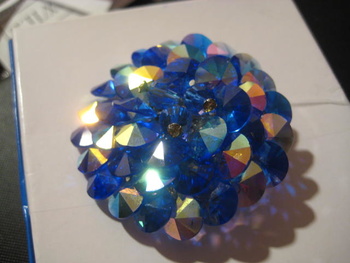 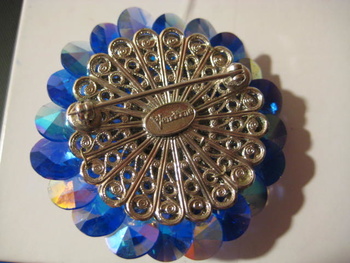 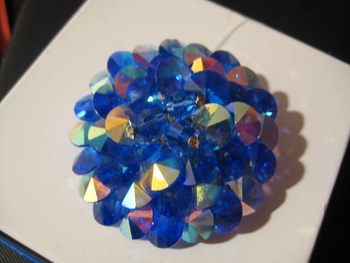 because of the signature on the back I think this brooch dates pre-1955. However as cited below, This process was perfected by 1955.

NOTES:
In 1944, the company “Coro” for the first time used the brand “VENDOME ” on some of its decorations. And almost ten years later, in 1953 appeared a full line of “VENDOME ” as a subsidiary of “Coro” instead of “Corocraft.” However, in 1957 Richton International Corporation bought the company “Coro”, and “VENDOME ”. The traditional motifs and designs of the 1960s jewelry – floral and geometric. When Helen Marion became the chief designer of “VENDOME ”, the company released innovative jewelry designs. Among them it is worth noting ethnic decorations and a series of artful collages (brooches). Since 1970 the company has significantly reduced its trade. Regardless of the style and design, decoration of ‘VENDOME ” are in great demand among collect (https://nasvete.com/vendome-costume-jewellery/)

In the early to mid 1950s, the Swarovski Company began experimenting with rhinestone coatings to produce a lustrous aurora borealis coating on crystals to make them more radiant and full of color. The process was meant to simulate the effect of the Northern Lights – the celestial Aurora Borealis. This process was perfected by 1955 by Swarovski. The well known rhinestone maker worked closely with Christian Dior in the design of jewelry with these stones, The first jewelry designs made from the stones with this shimmery coating was only available to the very wealthy. However, the process was soon licensed for use by other manufacturers such as Corocraft, who used it in their Vendome line, and soon started to become more affordable. Year later, when plastic beads with this finish became all the rage, the jewelry became cheaper and able to be purchased by the general public at reasonable prices. (https://www.google.com/search?client=firefox-b-1-d&q=when+did+AB+used+in+Jewelry)