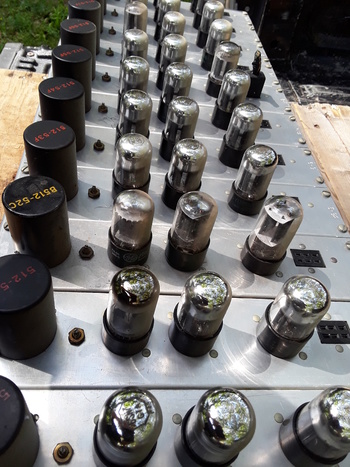 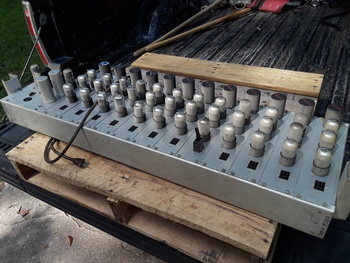 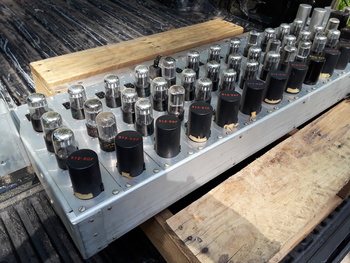 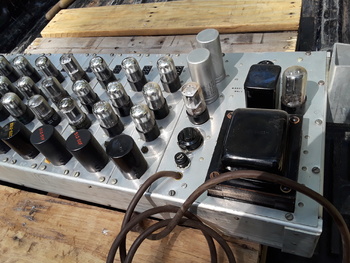 I've shown some of my electron tubes before

but guess who came across another chassis-ful this afternoon?? <LOL>

This thing is essentially the "tone generator" from a 1950's-ish electronic "organ-like device". ;-) The whole assembly served one and only one purpose -- to create exactly *12* individual audio 'root frequencies' correlating to the 12 notes of a musical scale, which then would get divided or multiplied by two (electronically speaking) maybe more than once, in order to fill in each note of every octave of the range of keys on its keyboards. (there's a few more steps in there too, but that's the 1c version of 'how old electronic organs worked'...)

Nowadays the full functioning of this (multiplied a few thousand times as much or more) would only occupy the *tinest* little bit of a microchip - even as soon as the 1960's-70's the technology had advanced enough (and shrunk the hardware accordingly) to have passed entirely thru "solid-state" and "transistorized" onto "integrated circuits" that could reduce all this to one relatively simple circuit board.

One other little tidbit -- the vast majority of all the tubes on this chassis are the exact same tube number 6SN7 GTA and most are (probably original and) by the same tube manufacturer, but there are a few replacements by other brands. These would no doubt be those "dividers" mentioned above.

This unit will never see electricity again, it having been removed/cut from all the rest of its surrounding O.L.D. by one of my customers who intends to reuse the outward parts of its former cabinet for other purposes. I just happened to be right place/right time for a different matter, noticing it and asking "what's that?", then getting the "you want it? in return... <LOL> Frankly I'll probably pull all the tubes to much more compact storage in a box and trash the rest...even the tubes aren't likely worth the effort it took me to carry 'em home, but there's *so many* of 'em -- how could I **resist** ??? [bad electrissical pun, sorry...]