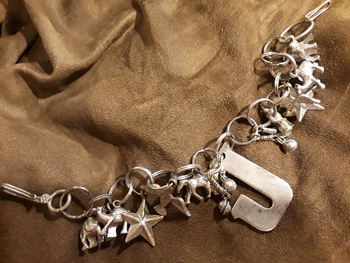 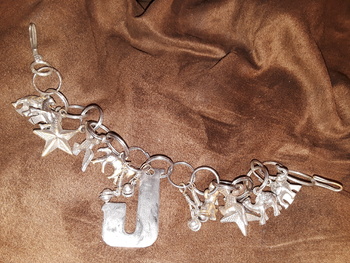 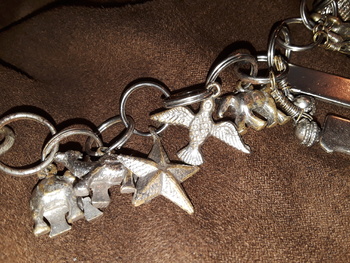 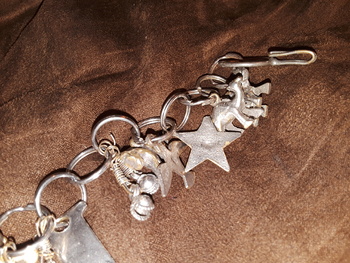 I'm not sure exactly what's the story with this one, it was just one (more) thing found not too long ago that seemed "interesting". Frankly I wasn't certain what it even was -- a grungy dirty handful of 'more metal bits' in with a box of discarded keys and stuff -- only after untangling all did I realize it wasn't really a keychain.

-- And it kinda *is* -- it is made up, anyway, of typical little split-ring keyholder loops each with a 'charm' of some sort on it. The charms include elephants, camels, birds, stars, and others, all arranged in pairs on either side of a large single "J" in the middle. On each end is a nifty sort of hook/loop clasp.

This was literally crusty with dirt and black greasy grunge when found, at first I almost wondered if any of its bits might be real silver. After cleaning (which involved long soaks in household de-greaser agitated every so often, then toothbrush scrubbing to get rid of the rest) it seems like the charms are something silver-tone plated instead, since their plating is (now, anyway) slightly worn where things rub together. The pics with flash show that, actually better than can be seen in real life. The whole thing is about 9-1/2" long.

I'm left with the guess that somebody assembled it from craft store sorta charms, even moreso since the loops on each charm figure are just *barely* large enough for the split rings. Who "J" is/was likely won't be known again but who cares, it'll still make yet one more little oddity of someone else's former jewelry to 'hang around' with all the rest of my crap someplace...?? <lol>

Charms and Charm Bracelets
See all 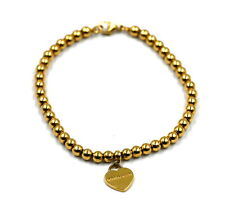 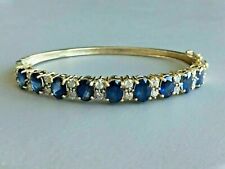 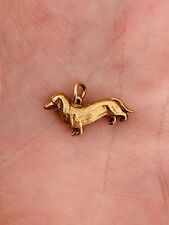 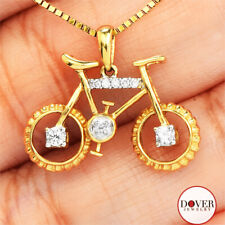