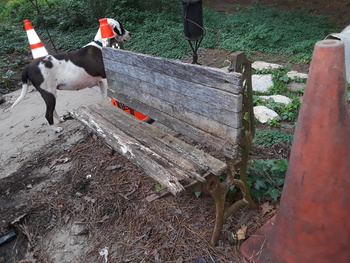 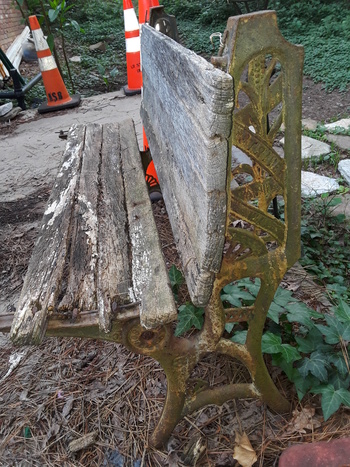 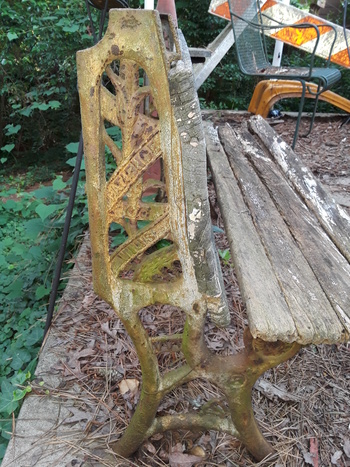 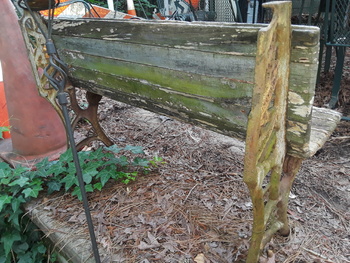 This bench has been mine for several years now, since the auction when my Mom and Dad sold their farm home in IL and downsized to a condo. I actually purchased it at said auction (as it had been listed specifically, thus I couldn't "disappear" it before the sale began) after outbidding one or three others, thankfully the final bidder against me was actually one of my distant cousins who recognized me before vice-versa, thus he quit bidding and let me have it. (and was profusely thanked afterward, when things were winding down and I finally realized who he was?!) I would have paid much more for it happily, I guess Mom never realized how much I really did like/want it, or she'd have just 'called it mine' before all of that happened -- no matter, I got what I wanted... ;-) :-)

It is, as matter of fact I don't feel the need to further verify myself, one of numerous such benches once installed at Walnut School in Fulton Co. Illinois. The (one room, frame style) country school building itself has been gone for many decades, this is one of two of its benches known (to me) to survive. THE REASON I don't worry about the story is pretty simple -- it comes to me directly from Mom, who was a student at Walnut School in her own childhood, where she learned while seated on the very same folding wooden benches. Her sister still has the 2nd 'known' one on her front porch, any others that could survive are possible but held by others.

The cast iron ends are decorated with motifs including a corn (wheat?) stalk and part of a ship's wheel in their designs, as well as banners reading "STRIVE AND WIN" on one end and "PATIENCE WINS" on the other, along with assorted other numbers and markings -- the hinged portion of each end identifies them as made by "THOS. KANE CO.". I don't know offhand if the designs on my Aunt's bench are the same or not.

The wood on them is original as far as I know, though it now shows much wear and decay from decades exposed to the elements. One of the cast iron seat supports (just one, I think) is also cracked in two slightly but the broken part remains present, being captive in the rest of the metalwork that holds the wood slats in place.

To its age I really don't know, but consider that Mom and my Aunt are both now in their octogenerian years... ;-)

My original thought was to 'restore it', then give it back to Mom. That plan didn't happen, now Mom and Dad have downsized again and really *don't* have space for it this time. Maybe that's an accidental benefit of laziness, since I've grown rather fond of it myself, in exactly the same condition in which it will now remain during my own curatorship of it... :-) :-) :-)

Benches and Stools
See all