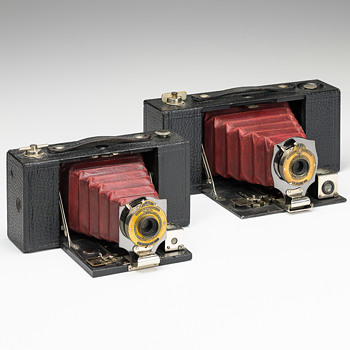 When I started collecting, before exclusively focusing (yeah … pun intended) on really early equipment, I went through a “Kodak” phase. Then again, nearly all camera collectors start with Kodak cameras or go through a Kodak phase. It makes sense because the company produced incredible numbers cameras, and the majority are in great condition selling for very reasonable prices.

The two cameras shown here are Folding Pocket Brownie models dating to around 1910 & 1911. These are among the very first cameras I acquired and, sentimentally, still hang on to them. They are classic horizontal format roll film cameras and were incredibly popular. Black imitation leather covers wooden bodies trimmed with nickel plated brass hardware and fitted with Pocket or Brownie Automatic shutters and simple meniscus lenses. Kodak catalogues describe the cameras as “Inexpensive, devoid of all complications, extremely simple to understand and to operate …”

The smaller camera at the left is the No.2 Model B which made 2¼ x 3¼ inch images on 120 roll film. Selling for $5.00, Kodak sold approximately 147,000. Early models have red leather bellows which were eventually replaced with black leather around 1913. Fun fact: Nearly all “No.2” model Kodak cameras can still be used to take pictures because 120 roll film is still available!

All-in-all, Kodak’s Folding Pocket Brownie models are found in nearly all dedicated Kodak collections and are great cameras for collectors new to the hobby. 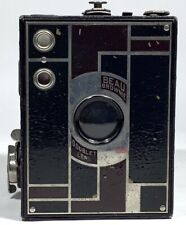 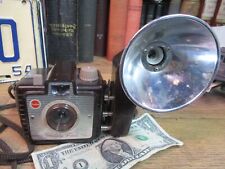