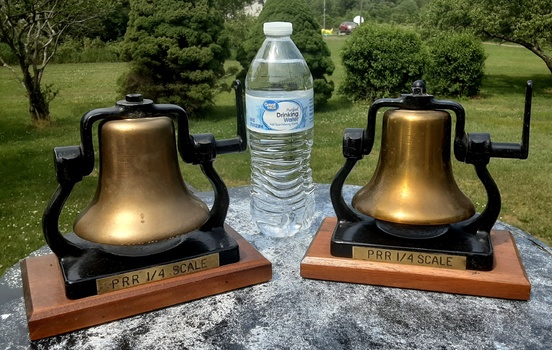 Back in the early 1970's a fellow by the name of Norman McGraw of Altoona, Pa produced these 1/4 scale sized replicas of the standard PRR locomotive bells. His knowledge of foundry work at the massive PRR shops in Altoona where he was the foundry foreman back in the 1940's when the last of the real locomotive bells were being cast helped him form a team with other individuals from the Altoona area to produce these replicas. His design of what needed done, along with a machinist, a woodworker, and an engraver resulted in 60 of these bells being produced. Each bell, made of bronze, just like the real things, were initialed NTM (Norman T McGraw) and individually numbered when completed. Seen here are #34 on the left and #60, the last one made, on the right. A friend of mine owns #59 as well. These three are the only ones I have ever seen in the 30 years I've known about them. I've seen just two others on online auctions, after the fact, or they would probably be seen in this photo as well. Haha!